The Swiss doctor Erika Preisig is cleared of murder again of helping a mentally ill woman take her life has once more been cleared of intentional homicide.

A Swiss appeals court in canton Basel rejected attempts by prosecutors to overturn a 2019 verdict that had cleared the doctor of murder. The court upheld the earlier conviction for violating laws governing the use of medicaments but reduced the punishment.

Erika Preisig had helped a woman, who was in her sixties and suffering from a mental illness, to take her life.

Prosecutors argued once again that the doctor should have first obtained psychiatric opinions before agreeing to assist the suicide. But the appeals court found this was not necessary given the nature of the mental condition.

The verdict is seen as a landmark in the legal assessment of euthanasia, which is lawful in Switzerland under certain conditions. This is because it touches on the critical issue of when a patient is deemed to be able to take the decision to end their life.

The doctor, who founded and runs the Swiss euthanasia association Eternal Life, was ordered to pay a reduced fine for medicaments offences. But the court waived a 15-month suspended prison sentence imposed by the original court case in 2019.

The case could be appealed once again in the federal courts.

Editor’s Note – After many years of working with his sister, Erika’s brother, Ruedi, has since established his own VAD service in the same building in Liestal. Ruedi’s service is Pegasos Swiss Association.

‘Swiss doctor Erika Preisig is cleared of murder again’ is a headline that everyone in the right to die movement can be proud of. 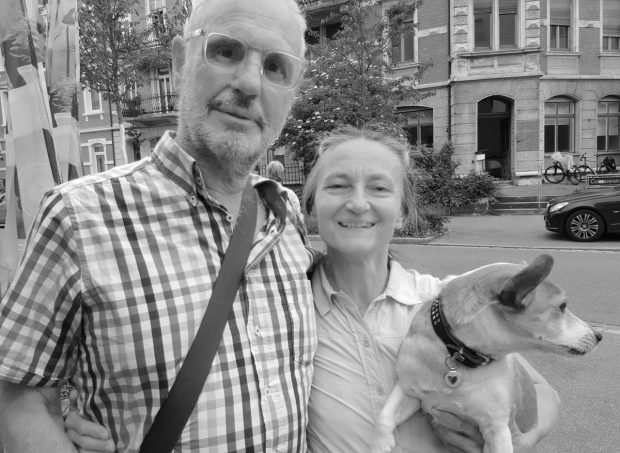 Philip Nitschke & Erika Preisig in Basel with Henny the dog

A large police presence in front of the cantonal court in Liestal – but also in the courthouse itself – was the outward sign that a special judgment was passed on Thursday.

This story is as reported in the Swiss broadsheet, Tages Anzeiger

Did the euthanasia assistant Erika Preisig from Basel disregard her medical duties and send a woman incapable of judgment to her death?

The cantonal court, like the previous instance, came to the conclusion that the 63-year-old could not be proven intentional homicide.

In essence, the negotiation revolved around the question of whether the 67-year-old woman, who accompanied Preisig to her death in June 2016, even had the capacity to make a legally valid wish to die.

The mentally ill woman had been treated for many years and suffered from ailments for which conventional medicine had no solutions. Opinion assessed in reverse A posthumous report by forensic scientist Marc Graf came to the conclusion that the woman was incapable of judgment.

The cantonal court, however, came to a different assessment – also because the court relied on more evidence than Graf was able to do.

Court President Enrico Rosa described the expert’s statements as “understandable and conclusive” – ​​but the court used them to reverse the conclusion.

Graf reported on the patient’s negative experiences with psychiatry. However, these were not so massive that one could consider their discontinuation of therapy and the wish to die independently of their mental disorder.

The cantonal court, on the other hand, argued that the woman, although she had voluntarily gone to the inpatient psychiatric ward, was no longer allowed to leave it, even though she had requested discharge several times.

According to the nursing reports, her swallowing problems were not given priority, although they were the main diagnosis.

You don’t have to be a doctor to die In the end, it was clear to the court that the decision not to undergo therapy was not primarily an expression of the mental illness, but rather was to be viewed as a cognitive decision.

The deceased was under medical treatment for around seven years until she manifested her desire to die. You have had “extensive negative experiences” with psychiatry.

“She ran from pillar to post to clarify her complaints so that she no longer had to suffer,” said Rosa on Friday.

The wish to die was “permanent”. The woman correctly assessed her subjective suffering and correctly recorded her future quality of life.

For the assessment of one’s own state of suffering, it does not matter that a person has no scientific knowledge to name it correctly, the court held. It is also not decisive whether the disease might even have been treated under certain circumstances.

“It wasn’t about judging whether the decision to want to die is objectively sensible or unreasonable,” said Rosa.

The court therefore came to the conclusion that the woman was perfectly capable of deciding on her own demise. In addition, Preisig “did not ignore the possibility that the wish to die could be an expression of a mental illness”.

The Basel doctor had “shown credibly” that she had not accepted that the patient was incapable of judgment in the phase when the death wish was formulated.

There have been careful clarifications and many discussions.

However, Preisig did not get away completely unpunished.

The 63-year-old was sentenced to a fine of 10,000 francs for multiple violations of the Therapeutic Products Act and the cantonal health law.

Preisig had unauthorized relabelling of the mortal agents intended for another person.

In addition, she was not authorized to store the funds in the doctor’s office.

A permit would have been required for this.

The state pays 95 percent of the procedural and court costs as well as the reduced party compensation for Preisig’s defense lawyer.

It is unclear whether the judgment will become final.

Both Preisig and the public prosecutor have not yet decided whether they want to move on to the federal court.