Halfway through the conversation Henk (83) is suddenly holding a large key in his hands. He carefully walks down the stairs to the gray vault in the basement of his house. There he unpacks a small plastic box with two jars. There are two white pills in each jar.

“Look,” he says cheerfully, holding one between his thumb and forefinger. “This is what they are.” 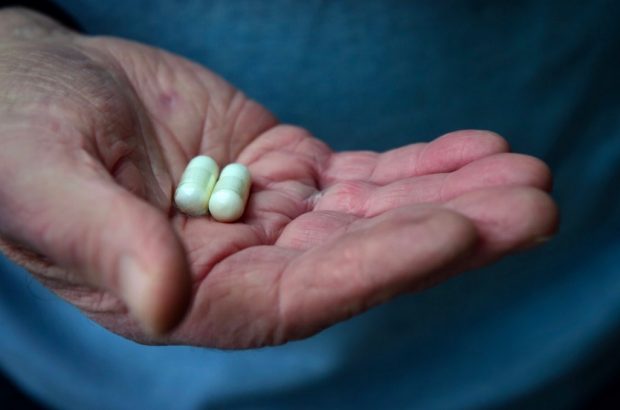 These are the “suicide pills,” “Method X,” “the Pill of Drion,” or the favored drug that has been discussed by Dutch right to die group Cooperative Last Will for a few years now. Four pills, for him and his wife. Three grams of a legally available preservative. Can be kept forever.

This allows them to end their lives in a “humane” way without the intervention of a doctor, when they themselves consider their life “complete”.

At the bottom of the box is an A4 sheet from a printer. “You have received Method X,” it says. On the page, next to the chemical name of the substance, is described how the person taking the two pills will enter into a coma after 15 minutes. “Death occurs through cardiac arrhythmia and cardiac arrest,” the text says. “Understand that there is no antidote. As soon as you have taken the powder, you will die. “The sheet also contains instructions such as: “Make sure you have a good anti-emetic.”

Henk – not his real name – grins, full of confidence. “I don’t have such a fear of death,” he says. Death? We just have to learn to deal with that, he says. “I have a fire extinguisher on the wall (in case of fire), a warning triangle in my car (in case I break down) and a last resort in my safe.”

How did he get those pills? He got to know the right people through Coöperatie Laatste Wil. “I sent someone an email, transferred some money, and one day DHL came by with the package,” he says. “I stayed home especially for the delivery person. You also do not want something like that to be delivered to the neighbors. “These days, he says,” it is a bit more professional. It now costs a bit more. And it no longer happens with DHL. ”

On Thursday, the results will be presented of a study on “completed life”, commissioned by the Dutch Ministry of Health, Welfare and Sport: ‘Perspectives on the death intentions of elderly people who are not seriously ill’.

The research revolves around how large a group of elderly people actually is, under what circumstances they live and why they would exactly want to die.

But if you take a look in Dutch homes, you will discover where the needs lie. Because this topic is a live one, especially among the elderly.

“I don’t have these pills because I want to die now,” says Henk. “I want them in case I want to die. It is a reassurance. So that I will never depend on whether or not a doctor wants to help me. ”

It is precisely the message that he hears from everyone else, he says: this gives peace.

Over the past two years, an underground movement has arisen in the Netherlands of people who provide each other with secret last way through the last means. Henk also actively participates in this, although he does not distribute it himself. That goes through other means.

Somewhere in the country the pills are being distributed. Risky? “No,” says Henk. “I have experienced the war. My wife delivered resistance papers.”

Henk is a well-to-do, happy man. He is highly educated, worked as an engineer on an international level for his retirement. He has children and grandchildren who are doing well in life. He became convinced when he saw how his own father, a successful businessman, became demented and shriveled up in a nursing home, dropping to a weight of 40 kilos.

“He was tied to his chair or he would fall off,” he says. “It was humiliating. He was just waiting for him to die. When I saw that, I thought: this is not going to happen to me. ”

For a instant a few years back, the debate seemed to emerge from the underground.

In 2018, Cooperative Last Will decided to actively distribute Method X in small secure safes. But the Dutch Justice Department put an end to that plan: assistance with suicide is a criminal offense, and the provision of X for suicide is also illegal, the Department said.

But since then the battle has not stopped. On the contrary.

Henk is one of the people who provides information and operates as a kind of “independent cell (of operatives)”.

For example, he conducts living room conversations, with a maximum of four, five people at a time. He has already participated in dozens of them. “Occasionally I receive a call,” he says. “And then I visit people and I provide information.

That is allowed. That is not punishable he says.

A few days ago I even received a call from a couple of elderly former doctors. They, themselves, had forgotten to stockpile useful medication during their working lives. (And now they, too, wanted Method X powder)”