Striving for Last Rights to Die For

While Queensland Parliament argues over voluntary assisted dying legislation, euthanasia advocate Cath Henderson is striving for last rights to die for and says a shocking number of Gold Coast residents are already taking matters into their own hands.

Two cancers, 12 years, multiple rounds of chemotherapy and radiation … it all added up to the fact Joe had enough.

He was under intense medication for his constant pain, had no quality of life and hated to see his wife struggle under the burden of his care.

Loath to enter hospice care or a nursing home, Joe decided to solve the problem in his own way. He took his own life.

While Queensland parliament argues over adopting voluntary assisted dying legislation, Cath says people would be shocked at how many Gold Coast residents are already choosing to take their own lives rather than to continue suffering or enter aged care.

She says those numbers will not change, even if the legislation is passed in September.

‘The senior citizens of this city are terrified – we are terrified of being shoved into a nursing home or forced to suffer out our last days .. or decades’ says Cath.

‘You wouldn’t believe the number of seniors on the Gold Coast who would literally rather die – and who are dying – than go into aged care. They are undertaking their own voluntary euthanasia, except it’s simply classified as a suicide. And the number who are doing it is incredible.

‘It’s a sane, humane and rational choice to leave life at the time they desire rather than being locked away or locked into a life time of pain.

‘The new legislation proposal is better than nothing, but not much. IT won’t change what we’re fighting for, which is that any person should be to choose at any time a painless, peaceful death’.

The Voluntary Assisted Dying legislation proposed for Queensland will only be eligible for residents who are over 18 and who have an eligible condition that is advanced, progressive, expected to cause death within 12 months and which causes intolerable suffering.

They must have decision-making capacity and must act voluntarily and without coercion.

Each eligible resident would have to be separately and independently assessed by two doctors and make three different requests at least nine days apart frmo the first and the last. There would also be a review board and medical professionals would not be allowed to ‘actively propose VAD’ to a patient.

Striving for Last Rights to Die For, Cath says Joe himself would not have been eligible under the proposed rules which she describes as ‘beg and grovel laws’.

‘This legislation is a starting point at least but it’s far too restrictive and won’t help most of the members we see at our meetings’ she says.

They are in so much pain but no doctor would say they will die in 12 months. You would not let your pet suffer like they are.

‘They just want the option to go when they can’t stand it anymore. Just knowing that there is something they can do painlessly to end it makes their pain easier to bear.

‘Abortion is legal so why not euthanasia? It’s not like anyone has to use it, and assisted dying is not hurting anyone else – it’s your own body, it should be your own choice.

Anyone of sound mind has the right to have a reliable and peaceful death’.

Cath says Exit International which was founded by Australian Philip Nitschke – dubbed the ‘Elon Musk of assisted suicide’ – was formed under the belief that ‘a dood death’ is a fundamental human right and it promotes the ‘right to die’ for adults of sound mind aged over 50.

She says the average age of Exit members is 75 years, with most being the ‘well elderly’ while a significant minority of members are seriously ill.

‘We have a bible’ of sorts written by Dr Nitschke, the Peaceful Pill [Handbook], that gives peole options of a simple way to die.

It’s banned in Australian but you can still get it online.

That’s why people join our group and come to our meetings – to find out who they can die’ Cath says.

Indeed, Queensland Police recently attend the home of an 84-year old Bundaberg man after he attempted to import the banned Peaceful Pill book.

Bargara retiree David Sandford ordered the book after researching his own end of life options, with two police officers later arriving on his doorstep to conduct a ‘wellness check’. The book was seized by Australian Border Force.

Striving for Last Rights to Die For, Cath says while Exit International can offer a painless, peaceful death, it is also a lonely death. ‘The sad thing when doing it the Exit way is that it has to be done on the quiet, you can’t have family with you holding your hand because you don’t want them to be accused of assisting you’ she said.

‘A lot of people leave a note to say they killed themselves and were not assisted, and also the reason that they did it: for example they don’t want to go into a nursing home and there’s not legislation to help them. It’s their last legacy… to use their voice.

‘The fact is that even though the government is putting more money into aged care, how can anything change when these businesses are run as a business? It’s about profits and returns for shareholders, not valuing the elderly.

‘Even if aged care was perfect, even if palliative care was freely available, there will still be a need for voluntary assisted dying as a choice. People dont’ want to be in pain and they don’t want to be a burden – physically or financially.

‘Look at the numbers of our ageing population versus younger generations, this is going to be a crisis.

‘People should be thanking us for pushing for more liberal VAD laws’.

Cath says she began campaigning for Exit International after witnessing her own father figure slowly and painfully die from Motor Neurone Disease (MND).

Striving for Last Rights to Die For, she says she vowed she would one day devote her life to ensuring that no one else had to suffer like he did.

‘It was terrible. At the end he was just skin and bone, curled into a foetal position. I can still see it. Once I retired I devoted myself to helping others avoid that path.

‘I have my own plan in place as well. I’m 72 now and in good health but I’ll reassess everything when I’m 80.”Of course, its’ easy to say now that I’m not scared of dying but you never know how it will be when it comes to the crunch.

‘There is a lot of people who talk to me about making that final decision. At first they are very sure, then as the time draws near, it’s a very different story. They have to ask themselves: will life get any better? Do I want to end up in a nursing home? What is the alternative if I don’t die soon?

‘It’s their decision, absolutely. It’s important to have a plan but they can always change that plan. Unfortunately, once you go into a home it’s too late. You don’t have those options anymore.

‘A couple of our members just recently couldn’t go through with the method they chose, and now they’re both in a nurse home. They hate it. They wish they were dead’.

Cath says it’s important people know the reality of many of our seniors.

She says it’s not fair their only choices are to live in pain, to live locked away, to die in pain or to die alone.

She says even if Queensland’s VAD laws are passed, on the ‘lucky’ few will be allowed to die painlessly and peacefully.

‘Choosing when to die should be a human right. Voluntary euthanasia shouldn’t be something that is shrouded in shame, secrecy and loneliness’ she says.

‘This is happening and it’s what people want. Why do we bury our heads in the sand? We should be granting these last wishes and last rights’. 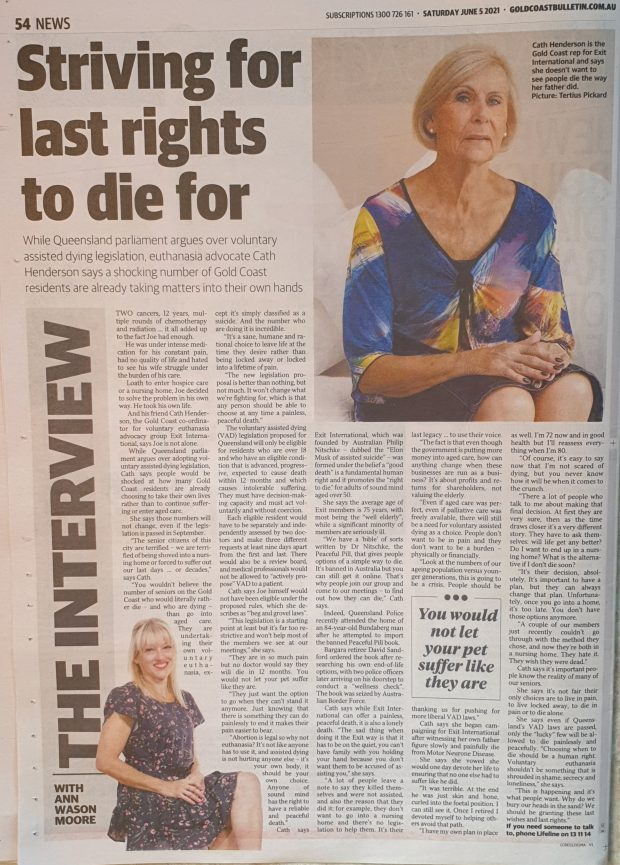