Max Bromson died surrounded by his family in Adelaide.

A terminally ill South Australian man who ran for the senate for the Voluntary Euthanasia Party has taken his life in a Glenelg motel room, says campaigner Philip Nitschke.

Former businessman Max Bromson was the lead candidate in SA for the VEP, which backs the introduction of voluntary euthanasia laws across the country.

In the run-up to the September 2013 election, the 66-year-old said it was vital for Australia to understand the importance of right-to-die laws.

Mr Bromson, who suffered from carcinoid tumours, a rare and terminal form of bone cancer, said he lived with chronic, excruciating pain and wanted the right to end his life peacefully at the appropriate time.

He said Mr Bromson’s closest family travelled to be with him.

They included his brother – to whom Mr Bromson had donated a kidney to keep him alive – who travelled to Adelaide from Vienna.

His sister Kerry travelled from Sydney, his son Matthew from Broken Hill and his daughter Pip from Lorne in Victoria.

After police were notified of the death, detectives confiscated the family’s mobile phones, tablets and laptop computers, Dr Nitschke said.

He said Mr Bromson filmed his own death and left a message on his phone saying: ‘‘Hello this is Max Bromson, I am deceased as of the 27th July, please do not leave a message.’’

Dr Nitschke said he was one of more than 100 people who attended Mr Bromson’s wake on Monday night to say goodbye to a friend they all loved.

Last week, Dr Nitschke was suspended by the Medical Board of Australia which ruled he posed ’’a serious risk to the health and safety of the public’’. 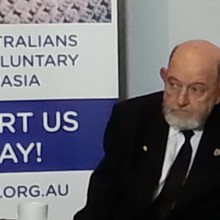