Lisette Nigot first made contact with Exit in 1999 during a workshop run in Perth. She talked to Exit Director Dr Philip Nitschke after the workshop and explained that she planned to end her life sometime before she turned 80. She explained that she was not sick and that illness played no part in her decision.

Over the next 3 years Dr Nitschke met with Lisette when he was in Perth and talked with her. He expected her to change her mind as her 80th birthday approached, but she did not. The arguments that resulted almost led to a breakdown of their relationship. In the end, Dr Nitschke accepted her position and assisted her in her choice.

In September 2002, just short of her 80th birthday, Lisette Nigot ended her life taking the barbiturates she had acquired many years earlier. Her actions were widely reported and caused a split in the voluntary euthanasia movement with many arguing that she should not have been given any support given that she was not unwell.

The story of her life and death became the subject of a documentary Mademoiselle and the Doctor made by Janine Hosking.

The Mademoiselle and the Doctor DVD is for sale here.

Mademoiselle and the Doctor is the new documentary from Australian Academy award-nominated filmmaker, Janine Hosking.

While the film started off as a cinematic exploration of the workshops of Dr Philip Nitschke it soon changed focus to incorporate the intriguing and deeply moving story of Lisettte Nigot.

Lisette Nigot is a French academic from Perth. She is 79 years old, healthy but does not want to turn 80.

This provocative documentary asks us if elderly, rational adults have a right to determine the time and place of their own passing.

Lisette Nigot said she had lived enough life. Dr Nitschke asks “who was I to tell her otherwise? She was not depressed. To the contrary, she was an intriguing, enchanting woman and while it saddened me greatly when she decided to leave, her suicide was her decision and her right.”

About the Stanley Hawes Award 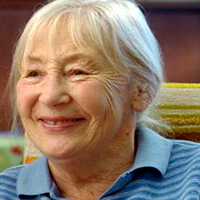 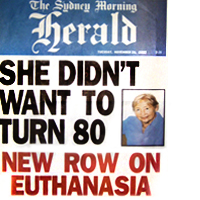