On 25 January 2007, a month short of his 80th birthday, Sydney doctor John Elliott became the fifth Australian to travel to the Dignitas service in Switzerland. Suffering from a cancer of the bone marrow, John was accompanied by Exit Director Dr Philip Nitschke, his wife Angelika Elliott and Exit’s Executive Officer, Dr Fiona Stewart.

American by birth, John Elliott lived the last 20 years of his life in the Sydney eastern suburb of Rose Bay.  The story of his trip to Zurich made front page news around Australia.  The Sydney Morning Herald travelled with him to Dignitas especially to cover the story. You can read it here. 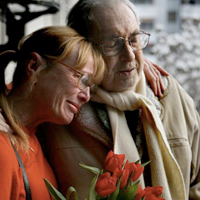