Article from The West Australian by Yasmine Phillips

Christian Rossiter cannot remember the last time he slept for a whole night without a particular thought churning through his mind.

He may be dependent on 24-hour care but his mind is sharp and active. He retraces the times tables in his head just to keep the boredom at bay.

His carers turn him at regular intervals to prevent pressure sores developing. He has no choice but to sit by as his life passes, lamenting the feeling that he is a “prisoner in his own body”.

Carefully, he speaks through a tracheotomy tube in his neck, but only for short periods at a time.

In his own words, he is experiencing a “living hell” and wants the life he once cherished to be over.

Christian’s brave decision to declare his wish to die publicly has not only put anyone who is seen to assist him under intense scrutiny, but exposed questionable flaws in the State’s legislation.

The fact that a 49-year-old man, who is capable of making his own decisions — and has the psychological reports to prove it — feels he has to travel halfway across the world to Switzerland to end his life seems cruel.

Granted, he does have the option of refusing his only source of nutrition now, effectively starving himself to death, but that could take days. Surely there is a more humane way to respect his wishes.

Euthanasia campaigner Philip Nitschke has dubbed WA’s laws, which impose a maximum term of life imprisonment for anyone convicted of assisting suicide, the “most savage” in the country.

Although suicide itself is not illegal, the act of assisting someone to carry out their own death is, leaving Christian in a vulnerable — and somewhat lonely — position.

He cannot enjoy the taste of a beer with friends, nor can he savour the tenderness of a fine steak. Instead, he is fed by a PEG — or a percutaneous endoscopic gastronomy, which is a tube that supplies nutrition directly into his stomach.

Once a keen traveller who has “flown around the world three times” and considered rock climbing one of his great passions, Christian is now confined to a bed, reliant on nursing care and six-hourly doses of painkillers.

So far gone are the days of extreme highs and devastating lows in his career as an industrial analyst that Foxtel has become his only source of entertainment and the sole vehicle by which his insatiable appetite for news and current affairs can be nourished.

He is determined, thought provoking and measured — yet straight to the point. And he explains his circumstances so well, you can’t help wanting to help his case.

“Don’t be too afraid to put sufferers out of their misery,” he said in a heartfelt plea to the State’s lawmakers and right-to-life groups last month. “It’s not a decision I’ve just arrived at. I’m a prisoner in my own body. I can’t even eat or drink. I can’t change the channels on the TV, except through a special device that I control with neck movements … life is a living hell.

“I can’t scratch any itch, I can’t brush my teeth, I can’t go to the toilet … I do times tables (in my head) to amuse myself. I have difficulty getting to sleep — I didn’t sleep a wink last night.”

There is no doubt that Christian’s story would evoke sympathy — at the very least — from even the most strident pro-life supporter.

His circumstances make it virtually impossible for him to do anything, let alone renew his passport, buy air tickets, pack his bags and get himself to Zurich, without calling on the help of someone else.

And he is anxious to trade places with the four walls he has been confined to in recent months for the snow-capped mountains of Switzerland, where voluntary euthanasia is allowed.

Switzerland has become a leading destination for “death tourists” but Dignitas — the suicide clinic where many foreigners have taken their own lives — is now facing tougher restrictions than ever to prevent “otherwise healthy patients” from committing suicide.

People who want to die in Switzerland will now have to prove they have a terminal illness, severe disability or the after-effects of a serious accident.

Euthanasia is a polarising subject, despite most community polls suggesting its support is far more widespread. And sadly, there are people who would seek to take advantage of any plans to legalise assisted suicide, even when the harshest consequences apply.

But surely a strong legislative framework, which sets out the appropriate safeguards, would be able to balance any intended abuse or manipulation of the system with a person’s right to determine their own fate.

Anti-euthanasia groups make a valid point in their claim that “hard cases make bad laws”, saying long-awaited so-called living wills legislation would have made all the difference if they had been enacted years ago.

Instead, West Australians have been waiting more than a year for those laws, which passed through State Parliament in June last year, to come into effect. But the State Government insists they are coming in the next two months or so.

Whatever the answer is, it is clear that people’s existing legal rights in WA are not widely known, or even understood.

Christian currently has the right to refuse medical treatment, which includes artificial feeding, but claims his persistent demands for his nutrition tube to be removed have fallen on deaf ears.

He spoke out because he wanted to make a difference. He wanted others to consider his position and he did not want his suffering to be in vain. The real test will be whether anyone responds.

Christian is an educated man, who completed a bachelor of economics at the University of WA before embarking on a career as a stockbroker in his mid-20s.

But suffering a string of bad luck that most would not endure in a lifetime, he was hit by a car and endured two serious falls, eventually developing spastic quadriplegia — radically altering his outlook on life.

And without being able to truly understand his position, experiencing the predictable monotony and constant pain he faces every day, we don’t have the right — or the expertise — to judge. 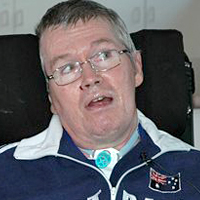 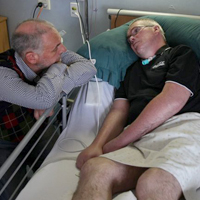