Caren Jenning was 74 when she was convicted of the manslaughter of her friend, former Qantas pilot Graeme Wylie. Seriously ill with breast cancer herself, after enduring a trial of some two months and determined not to die in jail, Caren drank a bottle of Nembutal she had smuggled back to Australia from Mexico some years earlier.

A caring, loving woman, Caren was a much valued member of Exit. Her death and the ordeal she was put through in the months immediately prior to her death were awful. She remains fondly in our hearts. 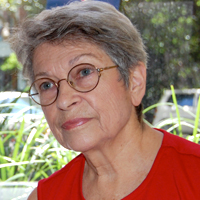