In 2007 Exit member Don Flounders from Victoria was diagnosed with mesothelioma. While he was well enough to travel, Don and his wife Iris wanted to make the trip overseas to obtain the drug that would provide him with a peaceful death, should he ever want that option at a later date.

Don had little money to make the trip but Angy Belecciu, terminally ill with breast cancer and unable to travel herself, offered to help him.

In February 2008 Don and Iris undertook the arduous 15 hour flight to LA, travelling down to Tijuana where they purchased the drug Nembutal over the counter. On their return to Australia, Don gave one bottle of Nembutal to Angy Belecciu.

Don spoke openly of his trip and the comfort he had derived from having obtained his own reliable means of a peaceful exit.

As a result, both the Flounders and Angy had their homes raided by the Australian Federal police. The drugs were not found.

Angy Belecciu took her Nembutal and died peacefully in March 2009.

Don and Iris Flounders were the 2009 recipients of the Bob Dent Award.

Angy Belecciu and Don & Iris Flounders proved how there is unity and humanity in the face of adversity. 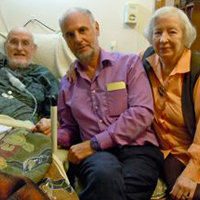