The unit helps a patient painlessly end their life by flooding the chamber with nitrogen.
By Tom McKay

Assisted suicide booths, a longtime fixture of sci-fi, may soon be a thing in Switzerland. Swiss outlets report that the manufacturer of a 3D-printed assisted suicide pod called the Sarco capsule has received legal approval to be used by the public.

Switzerland has few legal barriers to physician-assisted suicide and it has become an accepted practice, with hundreds of people (most often those with a terminal illness) choosing to end their lives via that method each year.

Several other European countries, including Belgium, Germany, Luxembourg, and the Netherlands have similar policies in place, while some of their neighbors accept other practices such as passive euthanasia or withdrawal of life-sustaining treatment in certain circumstances.

In physician-assisted suicide, a patient chooses to die with the help of a medical professional, which often means simply writing a prescription for a lethal drug. During euthanasia, a medical provider uses active means to painlessly end a patient’s life, and passive euthanasia or withdrawal treatment both involve cessation of medical interventions that prolong the life of the patient. 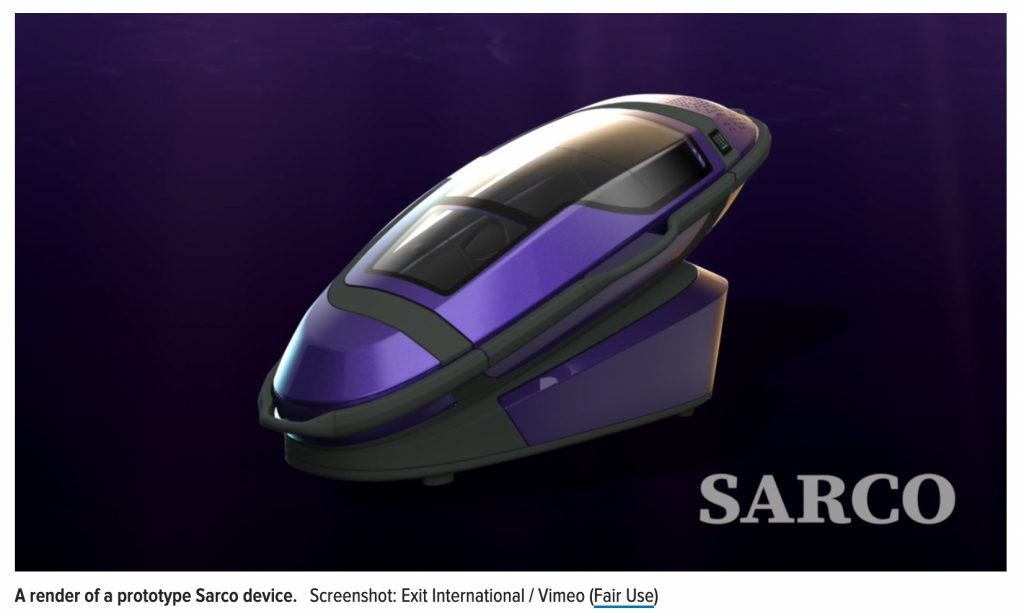 According to SwissInfo, inventor Dr. Philip Nitschke of Australia-based international nonprofit Exit International says that the Sarco “death capsule” is “activated from the inside by the person intending to die” and can be towed anywhere, such as “an idyllic outdoor setting or in the premises of an assisted suicide organisation, for example.” He added that the device is designed with comfort in mind.

“The capsule is sitting on a piece of equipment that will flood the interior with nitrogen, rapidly reducing the oxygen level to 1 per cent from 21 per cent in about 30 seconds,” Nitschke told SwissInfo. “The person will feel a little disoriented and may feel slightly euphoric before they lose consciousness. Death takes place through hypoxia and hypocapnia, oxygen and carbon dioxide deprivation, respectively. There is no panic, no choking feeling.”

Nitschke added that death usually follows unconsciousness in such a setting after around five to ten minutes.

In 2020, he told the site, Exit International asked for “senior advice” on the legality of using the device in Switzerland by the country’s medical review board, and the organization recently learned there are no legal issues standing in the way of the device’s rollout.

The first and second prototypes are respectively on display in a museum and not “aesthetically pleasing,” Nitschke added, so “barring any unforeseen difficulties” the first operational unit won’t be rolled out (with the aid of a local organization) in Switzerland until 2022.

Some features, such as a camera necessary for communication and recording informed consent, still need to be implemented.

Nitschke told SwissInfo that, eventually, Exit International plans to develop ways for the process to be carried out without the requirement that a doctor be present for psychiatric review.

“Our aim is to develop an artificial intelligence screening system to establish the person’s mental capacity,” Nitschke told the site. “Naturally there is a lot of skepticism, especially on the part of psychiatrists. But our original conceptual idea is that the person would do an online test and receive a code to access the Sarco.”

Critics of the Sarco device say that it runs contradictory to medical ethics. Dr. Daniel Sumalsy, a professor of biomedical ethics at Georgetown University and opponent of assisted suicide, told Newsweek in 2017 that “it’s bad medicine, ethics, and bad public policy. It converts killing into a form of healing and doesn’t acknowledge that we can now do more for symptoms through palliative than ever before.”

In Switzerland, according to the Guardian, the law only prohibits physician-assisted suicide when it is done with self-motives, meaning that it is typically done with the assistance of non-profit organizations.

In 2020, the Daily Beast wrote, some 1,300 assisted suicides were carried out in Switzerland.

According to Business Insider, statistics show that from 2019 to 2020 in the Netherlands, euthanasia rates increased by 9% to 6,938 procedures.

More and more generations see euthanasia as a solution for unbearable suffering.

But the thought that euthanasia is an option in the case of hopeless suffering is very reassuring.”