Dee Hilton already knows how she would like the end of her life to look.

She imagines a glass of champagne with her siblings (“just a little bit for me”) and time with her children and grandchildren – the ones who are “old enough to understand”.

And then, at the end, it would just be her with her “wonderful” husband, Andrew.

On Thursday, Hilton got the news she had been waiting for. After months of delays and following a mammoth late-night debate, New South Wales became the last state in Australia to pass voluntary assisted dying legislation. It means that she will have “the right to take my own life”.

It has been six months since the bill passed the state’s lower house despite opposition from both the premier, Dominic Perrottet, and the Labor leader, Chris Minns.

Its passage just after 12.30pm on Thursday is a landmark moment in the state, and means within 18 months people with a fatal diagnosis in NSW will be able to access voluntary assisted dying.

The bill was spearheaded by the independent MP Alex Greenwich with 28 co-sponsors last year after a series of failed past attempts.

He said the bill marked a moment in which NSW “finally passed a threshold of honesty and compassion”.

“Honesty that not all people die well, and compassion that people with advanced and cruel terminal illnesses will have the same end-of-care options as those in every other state,” he said.

The bill limits access to voluntary assisted dying to people with terminal illnesses who will die within six months, or 12 months in the case of a person with a neurodegenerative condition experiencing unbearable suffering.

The person must be found to have capacity to make the decision to go ahead voluntarily without duress, and the application would be assessed by two medical practitioners.

Supporters had hoped the bill would pass on Wednesday night, but after a mammoth debate in which opponents moved some 90 amendments in a late-night filibuster attempt, it passed the upper house on Thursday afternoon.

One of the bill’s opponents, the employee relations minister, Damien Tudehope, said the bill “betrayed” people suffering from a terminal illness. 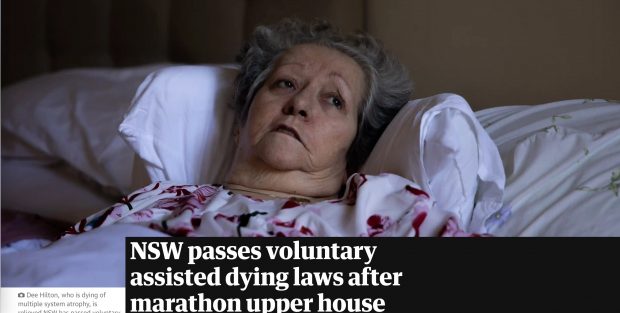 “Some will say this is a great moment for NSW,” he said. “I will leave here today thinking this is a dark day for our state.”

But for Hilton, the bill’s passage will come as a relief. Five years ago the 76-year-old was diagnosed with a rare degenerative neurological disorder known as multiple system atrophy. It means that, in her words, “all the systems in my body are dying quicker than they normally should be”.

About eight months ago she had a meeting with her neurologist in which he told her there was “no point” in seeing him any more.

“Hearing it was like a smack in the face,” she said.

If she’s lucky, she says she may have three more years to live. But she understands that the disease which has robbed her of so much – sharing a bed with her husband, cooking for her family – is “going to get worse, it’s not going to get better”.

“I don’t want to be hanging around” to find out what the worst looks like, she says.

It could have been very different for her. Last year, she attempted to take her own life while her husband was out of the home.

“He came home and found me, and was very distressed and very upset. I don’t want to have to go through things like that,” she said.

“I just really want my husband to remember me as a person, not as somebody who’s pissing and shitting themselves. We used to have a beautiful king bed, now I am in a hospital bed. We can’t even sleep together on the same bed now.”

The Dying with Dignity NSW president, Penny Hackett, called the bill’s passage “an historic moment for people in NSW”.

“This bill will give an immense sense of hope and relief to many people with a terminal illness who simply want to take back some control at the end of their life.

“All people want is to know that if they have a terminal illness that will cause prolonged suffering at the end of their life they will have the option to die a peaceful death.”

NSW becomes the last state to pass voluntary assisted dying laws. Victoria passed what the premier, Daniel Andrews, described as the most conservative euthanasia regime in the world when it passed in 2017. Western Australia followed in 2019, before Queensland passed similar laws last year.

For advocates, the next step becomes challenging the federal government to overturn Howard-era laws which prevented the Northern Territory and ACT from making their own laws on voluntary assisted dying, something Greenwich referred to after the bill passed.

“It’s now for the federal parliament to give the territories the same ability to pass the same laws,” he said.