In 1995, the Northern Territory of Australia changed the world. Despite incredible odds, the Rights of the Terminally Ill Act, passed the NT Parliament by a single vote.

The new law allowed sick Australians (not just Territorians) to get help to die. Getting the law to work was another matter entirely.

Critical help in our lobbying came from an unexpected quarter: the ABC program, Four Corners.

Despite suffering awful stomach cancer, Max drove 3000km to Darwin to get help to die. But I could find no second doctor who would approve his application.

The shocking scenes of this emaciated, almost-dead man in Four Corners inspired Darwin surgeon, Jon Wardell, to break ranks with the medical establishment.

After the episode went to air, Dr Wardell phoned me to say that next time a patient needed sign off, he would help.

John Wardell was true to his word. He supported the application of Bob Dent to use the Rights of the Terminally Ill Act. The rest, as they say, is history.

History shows the ROTI Act lasted only 9 months because Melbourne MP, Kevin Andrews, led a powerful campaign to deny the rights of Australia’s Territories to make laws on euthanasia.

The Euthanasia Laws Act passed with the support of both the major parties. This is no party-political issue.

26 March 1997 became a day of national shame on Australia’s democracy. 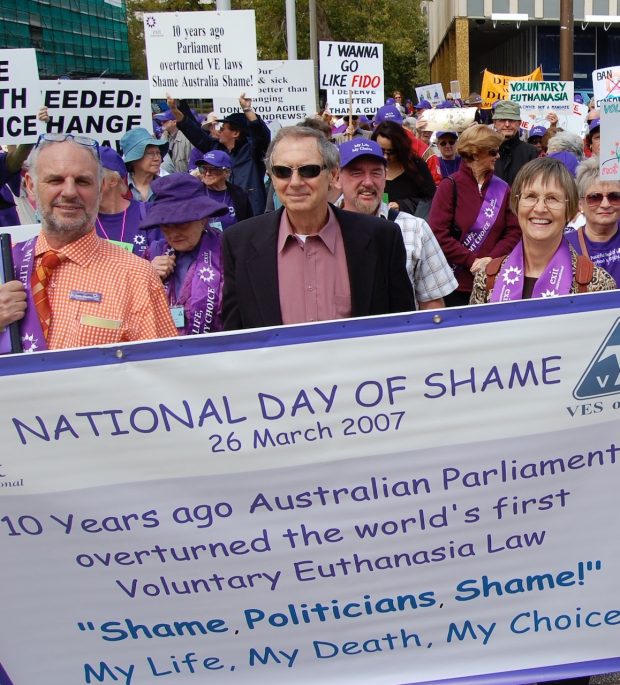 Protesting in Canberra on the 10th Anniversary of the overturning of the Rights of the Terminally Ill Act (pictured: Philip Nitschke, Marshall Perron, Sandra Kanck).

The will of the elected representatives of the Northern Territory had – all of a sudden – counted for nothing!

At the time, the deeply religious, Kevin Andrews, said he hoped to set the voluntary euthanasia movement back by 25 years. He was not wrong.

With this deeply-undemocratic piece of legislation now abolished, the rights of Northern Territory are restored.

This means the NT is free again to lead the world, in its own innovative way.

The Northern Territory is unique: it is a place that prides itself on being tougher than any other part of the country. That’s why it got the land-breaking ROTI Act in the first place.

The Territory wanted that law, precisely because no other State/ Territory was tough enough or brave enough to do it.

I take this opportunity to urge Territory politicians to dream big again.

The fairest, most equal end of life law in the world is the Swiss model. It is simple and fair for everyone.

The criteria is not restricted to the terminally ill (with less than 6 months to live). The safeguards are simple and effective (such is Swiss caution).

1. You must have mental capacity and the action must be voluntary

2. You must do the act that brings about death yourself.

I strongly the politicians of the NT to rise to this challenge. History shows they can! And they should!! 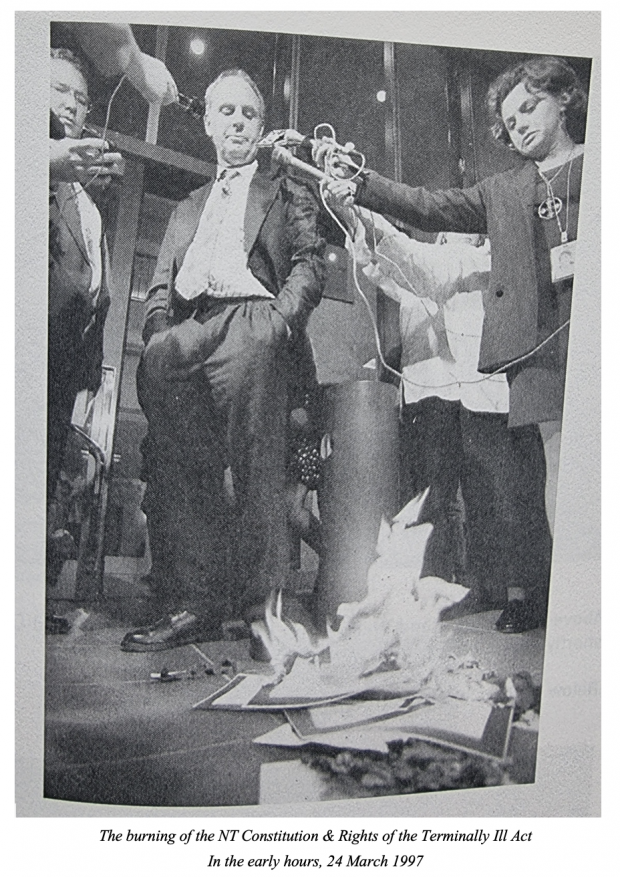