New Mexico is the 10th state (plus one jurisdiction) to have such a law, but the legislation in New Mexico is a little different from the laws in the other states ― the New Mexico law has removed barriers to access.

Until now, these laws have been modeled on the original legislation that was passed in Oregon in 1997, the first state to legalize MAID.

New Mexico Erases Barriers to Medical Aid to Dying shows how the State has broken the pattern by removing some of the challenges that patients have faced in trying to gain access to MAID without weakening protections against abuse.

It has “removed some of the unnecessary roadblocks…. This is the first state that has improved upon the Oregon bill, and this is what other states need to be doing,” said Kim Callinan, MPP, PMP, president and chief executive officer of Compassion and Choices, the largest national advocacy group for MAID.

New Mexico bill HB 47, known the Elizabeth Whitfield End-of-Life Act, went into effect on June 1. It was named for a former state district judge who testified in favor of MAID in 2017 and who died of cancer the following year.

It includes several provisions that veer away from the original Oregon model:

It clarifies that if a clinician objects to participating in MAID, he or she must inform the patient and refer the patient to either a healthcare practitioner who is able and willing to participate or to another individual or entity to assist the requesting individual in seeking this end-of-life option. 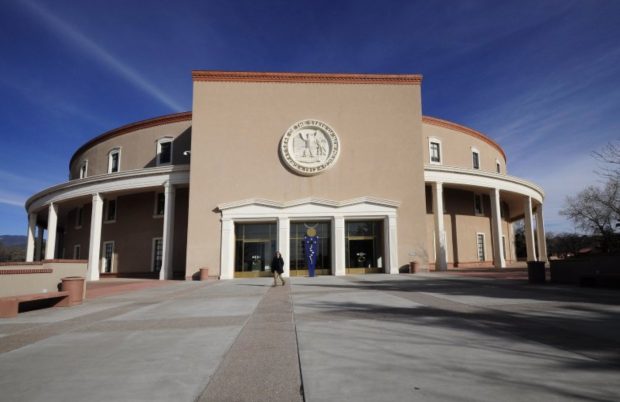 One in five Americans (22%) now live in a jurisdiction that permits terminally ill patients to choose an end to their life with medical help from a doctor. Most such patients have cancer.

However, the practicalities of acting out what the law allows are formidable, and patients who choose this option often must overcome unforeseen obstacles.

To be eligible for aid-in-dying medication, an individual must meet four criteria: be 18 years old or older; be terminally ill and have a prognosis of 6 months or less to live; be mentally capable of making his or her own healthcare decisions; and be able to self-ingest the medication.

The MAID process requires that two oral requests be made and that at least 15 days pass between the requests. It also requires that a written request be made using a statutory form that is included in the state’s aid-in-dying law. Many states also require a second waiting period, in which the physician must wait 48 hours from the time of receiving the written request to write the prescription.

In addition, two physicians are required to certify that the criteria are met: one who is considered the attending and who writes the prescription, and a second, the consultant, who certifies that all criteria under the law have been met.

Studies have shown that the law is protecting patients, with little evidence of abuse.

“But we also have robust data showing that the law is not meeting its intentions and that we have erected too many barriers for many to access it,” Callinan told Medscape Medical News. “We want to keep the right safeguards in place, but we are seeing such small numbers of people using it, and in many cases it’s because they can’t get access.”

Recent reports have confirmed that only a small number of patients who have chosen MAID have completed the process.

Legislation for medical aid in dying in New Mexico has a long history. The first bill was introduced in 1995. The bill in its current form failed to pass several times, explained Phyllis Bergman, RN, NP, a women’s health nurse practitioner in Albuquerque, New Mexico, who is an advocate for the law. “But we made the decision not to make it weak and dumb it down,” she said. “We weren’t going to back down, and as a result, this is groundbreaking.”

As it made its way through both chambers of the New Mexico legislature, HB 47 was amended several times. All of the amendments that were eventually adopted were considered “friendly” by the bill sponsors and did not substantively affect the bill’s key provisions.

Bergman emphasized the necessity of having NPs and PAs involved. “This is a very rural state, and most people don’t live in Albuquerque and Santa Fe,” she said. “The ability to allow nurse practitioners and PAs to consult and prescribe is huge, and the ability to use telemedicine is huge.”

She pointed out that although the bill does not specifically address the use of telemedicine, it doesn’t need to, because it is not prohibited by law in New Mexico.

Shortening the waiting period was an essential part of the bill. “It’s draconian to make people wait 15 days,” she said. “This is something they’ve been thinking about it since their diagnosis, not something they decide on a whim.”

Bergman noted that when the bill was being drawn up, she emphasized accessibility as “a big issue.” Her advocacy for this comes from a personal experience. Her younger sister Vicki, who was living in Los Angeles and was dying from pancreatic cancer, had sought out MAID.

Her experience was fraught with challenges and barriers to care. She had a physician who did not want to participate and who would not assist her in finding an alternative physician. One was eventually located, but by this time, Vicki was in hospice, medically fragile, and weighed 85 pounds.

After her initial consultation, she was required by California law to return 15 days later. Bergman pressed for a telehealth visit, because going to the initial appointment had been an arduous experience. But the idea was rejected, and they were told that she had to come back in person.

“There should have been a fast track for my sister to get through the process,” she said. “Even just getting to the first appointment is a monumental task for a dying person. Someone with stage IV pancreatic cancer deserves a fast track ― it’s a disease that is not going to get better or more tolerable.”

Vicki suffered excruciatingly in her final weeks, and she shouldn’t have, Bergman added. “I testified about this to the New Mexico legislature,” she said.

Bergman explained that to facilitate passage of the legislation, an implementation committee was formed. “We had 8 months of meetings — we talked to pharmacies, hospices, and physicians to try to figure out how this might work,” she said. “We haven’t crossed every ‘t’ yet or dotted every ‘i,’ but it’s a good head start.”

In California, which legalized MAID in 2015, a law is pending that will change some of the provisions to facilitate access. The newly proposed law, known as SB-380, would make the following key changes in California law:

SB-380 would eliminate the “sunset clause” in the original law and make the original law, which is set to expire at the end of 2025, permanent.
It would reduce the mandatory waiting period from the current minimum of 15 days to 48 hours between the two oral requests for aid-in-dying medication for all eligible patients.
Healthcare systems and hospices would have to post their MAID policies on their websites, which would increase transparency for terminally ill patients who need prompt access to this information.

“The New Mexico law looked at all of the issues and has made it the most accessible and most reasonable law to date,” said Chandana Banerjee, MD, MPA, HMDC, an assistant clinical professor in hospice and palliative medicine at City of Hope National Medical Center, in Duarte, California.

“One of the most important changes is shortening the wait time,” she told Medscape Medical News. “From a physician’s perspective, it’s not something a patient suddenly thinks of — they will have been thinking about it for a long time, since their prognosis.”

There is no purpose or benefit in waiting an additional 15 days, Banarjee said. After a patient receives a prescription, it is not going to be used until they reach a certain point, she explained.

“From my experience ― as well as hearing this from other providers ― sometimes disease progression can be drastic during those 2 weeks, and patients may reach the point where they can no longer ingest the medication themselves,” she said.

Having worked with patients who opted for MAID and who completed the process, she said that obtaining the prescription gives these patients some peace of mind, whether or not they choose to ingest it.

Another key point in the new bill that is pending in California is that it would improve transparency. “Right now, healthcare facilities can forgo participation and have no obligation to tell their patients about their policy,” said Banerjee. “This law now would require them to do so.”

SB-380 mandates that all oral and written requests be documented and dated and that if care is transferred, the record of these requests must also be transferred.

The law also requires that any healthcare practitioner who is unable or unwilling to participate needs to inform the patient, document the date of the request and the practitioner’s notice of their objection, and transfer the patient’s relevant medical record upon request.

“This is something we all need to do for humanity,” said Banerjee. “We don’t learn about it in medical schools, and we need to normalize it and accept it.

“It is a disservice not to,” she added. “We need to change the language around it. Some physicians still call it euthanasia and suicide — it is not. It is medical aid in dying, and we need to be clear in the language and teach it the right way, and that’s when we will see a culture change.”

In some states, MAID laws have been updated, and in others, changes are being considered.

Oregon updated its law in 2019. Patients there are exempt from having to wait for a period that exceeds their life expectancy. Patients who are expected to live less than 15 days are exempt from the 15-day waiting period between the first and second oral requests for medication.

In Hawaii and Washington, amendments that would shorten the waiting period and allow APRNs and/or PAs to participate, along with other amendments, came before the respective state legislatures this year but did not pass.

“Through this legislative session, we did see states starting to innovate off of the Oregon model,” said Callinan. “Hawaii’s bill will be reintroduced, but we’re not sure about Washington.”

Callinan noted that in states that are considering measures for the first time, “we are definitely seeing lawmakers who are willing have a debate what makes a good law rather than just going with the Oregon model.”

Editor’s Note – Exit has long argued that it is ridiculous to make seriously ill people who are close to death jump through administrative and legal hurdles, just to get access to a peaceful and reliable death. While it is pleasing to see New Mexico take some steps towards addressing the bureaucratic nightmare that is MAID, there is still far to go. This is why the Peaceful Pill eHandbook is more relevant than ever.

If you are over 50 years and of sound mind, the rest is up to you!

That New Mexico Erases Barriers to Medical Aid to Dying is a start!