The Australian Dr Philip Nitschke, the head of the global pro-euthanasia group Exit International, is the first doctor to legally assist someone to die.

He has also just completed his latest creation: a futuristic capsule that makes it possible to finish without medical assistance.

Perhaps he would have remained an unknown doctor at the hospital in Darwin, a small Australian capital that turns its back on the desert, if history had not interfered.

Still, today, Philip Nitschke, 73, is an active and controversial pro-euthanasia and assisted suicide figure at the head of Exit International. 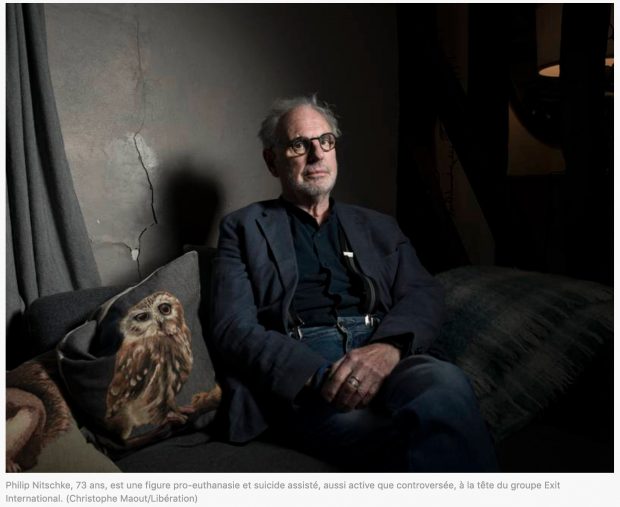 He is the one the press have nicknamed “Doctor Death” – he is a man with white hair, pair of suspenders and round glasses, both creator of machines for the afterlife and thinker of the ultimate.

Convinced, according to a phrase he loves, that life is a gift that must be returned, he pleads that everyone, regardless of their state of health, can make the choice of a “good death”.

Liberation first met the Australian in a cafe in Paris in October 2019, just after the wave of searches of activists from the French association Ultime Liberté and the seizure of Nembutal, a powerful barbiturate.

“There has never been a raid on this scale. Even in England, Canada or New Zealand, “he worried.

“In France, euthanasia is a subject on which there is absolutely no progress, it is very surprising. No doubt the influence of the Church … ”

This inexhaustible and passionate man was once a taxi driver, tram driver, ranger in a national park before becoming … the first doctor to legally help someone die.

We have to go back to 1995. At the time, the Parliament of the Northern Territory authorized euthanasia under strict supervision for patients suffering from an incurable disease.

Despite fierce opposition from the Church and part of the medical profession, the law passed in extremis: 13 votes to 12.

Philip Nitschke was one of the leaders of the campaign. “I was told, since you wanted this law, go ahead, use it!”

Bob Dent, a former carpenter, suffering from prostate cancer, ate one last ham sandwich and then sat down in front of a Toshiba big computer, connected to a needle. A series of questions appeared.

Do you understand that if you continue to the last screen and press the ‘yes’ button, you will receive a lethal dose of drugs leading to death?

Are you sure you understand that if you continue and press ‘yes’ on the next screen, you will die?

With one final click, he received a lethal dose of Nembutal.

It was Philip Nitschke who came up with the machine – dubbed “Deliverance” and now on display at the Science Museum in London – because he didn’t want to “just give an injection” and “invade the personal space” of his patient.

Everyone must be the sole master of their own destiny, he believes.

Philip’s work follows in the legacy of Jack Kevorkian, a Michigan doctor who helped a dozen people die (and ended up in prison), using a device called Thanatron.

But in Australia, only three other patients saw the black screen of the Toshiba, crossed out with the word “Exit” because, in 1997, the Federal Government backpedaled.

“People kept coming to me asking how to get Nembutal,” says Philip Nitschke.

In particular this Frenchwoman, Lisette Nigot, who had been a professor at the University of West Australia. Her vision of things upset all that went before.

At first, Philip Nitschke did not take her seriously, but she returned the following year with the same request.

“She replied that she was not there for a sermon but for information, that I was not a judge and that I could not claim the right to choose who should live or die. And she was right!”

When he established Exit International in 1997 – “a public not-for-profit company with an online support base of over 30,000 people worldwide” – he made it a global struggle: every sane adult over a certain age should have the means to end his life when he wants to and whatever his reasons.

According to him, the ideal would be to buy a vial of Nembutal, store it for many years, “just in case”, as “a safety net”.

In his “best-seller”, The Peaceful Pill Handbook, written with his wife Fiona Stewart and translated into several languages, he details fifteen other methods, depending on their degree of reliability and serenity, to end it.

A sort of Geo Trouvetou de la mort, it even offers tools of its own design such as an “exit bag”, diffusing inert gases.

This is not to the taste of its detractors, who even include among them supporters of the right to die with dignity who accuse it of “glamourizing” or of encouraging suicide, by giving easier access to lethal means. . And inevitably, trouble quickly arrived …

In 2014, a depressed 45-year-old man, suspected of having killed his wife, ended his life by taking Nembutal.

The case caused a scandal in Australia. “I was considered a public danger and my doctor’s license was taken away,” said Philip Nitschke.

Finally, the justice system forbade me to speak publicly euthanasia.

In a theatrical movement, he burned his license, taking Twitter as a witness, and went to Switzerland, before settling in the Netherlands.

Today, while the pandemic has put a halt to the pro-euthanasia lectures he gives around the world, he continues the fight online, through his studio in Amsterdam.

Nitschke has just completed his last – and more resounding – creation which will be used in Switzerland (where assisted suicide is authorized), from next summer, he hopes.

The “Sarco” is a futuristic-designed, 3D-printed coffin that takes you to eternal sleep thanks to the decrease in the oxygen level.

Transportable, it will allow a person to choose the landscape of their choice before settling down for a final trip.

Death in the meadow, by the lake and it is “quick, soothing and elegant,” boasts Philip Nitschke, indicating that there is “already a long waiting list.”

Beyond that, on the sensationalist side, it is above all a matter of removing this moment from any medical framework.

Would he ever use his own capsule? He doesn’t know, he just wants “the choice”. 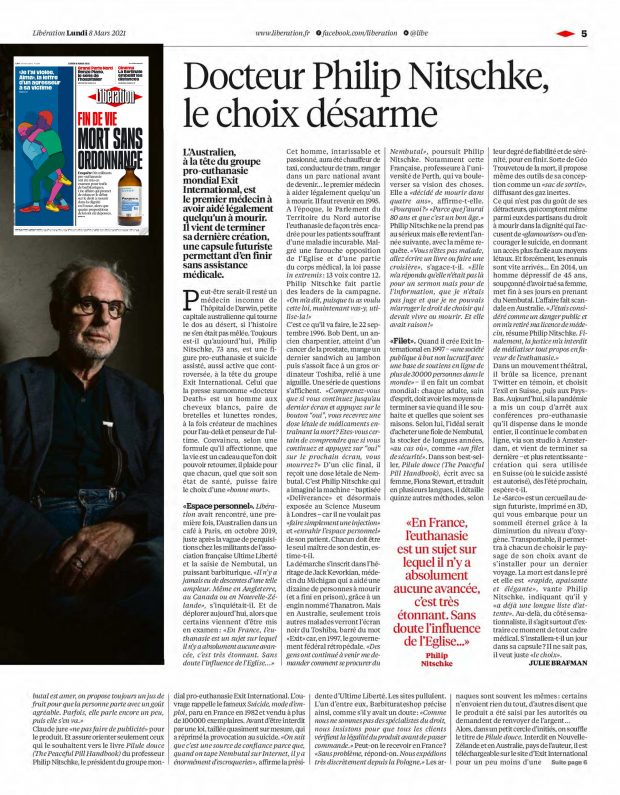