If one cannot leave life, it is a prison

François Galichet is a former professor of philosophy, former vice-president of the association Ultime Liberté and former head of the Isère group Ultime Liberté, which campaigns for the legalization of assisted suicide and voluntary euthanasia. Their motto? “The freedom to dispose of his person, his body and his life and therefore to kill himself”

This former professor of philosophy, now aged 78, is one of ten activists charged last week for “propaganda in favor of products allowing death”, “complicity in importation, detention and acquisition of plants classified as psychotropic “and” complicity in the smuggling of goods dangerous to public health “.

They are suspected of having allowed people wishing to end their life to obtain Pentobarbital-Natrium, a product banned in France.

From his home in Isère, François Galichet spoke to France 3 Alpes. 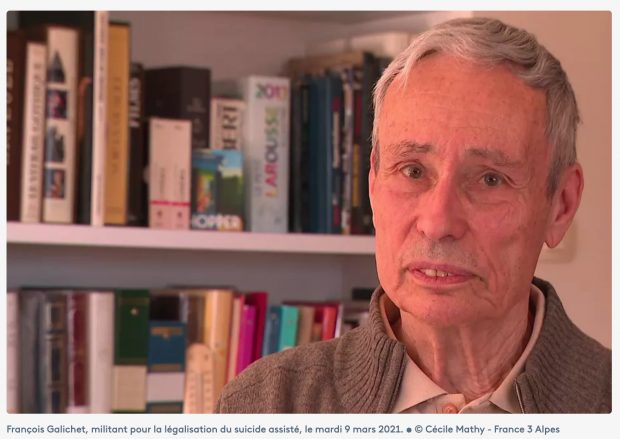 What is your reaction after your indictment?

I had the feeling  that the actions of the police were greatly disproportionate. Sixty to 70 gendarmes or police officers were mobilised throughout France to arrest and place under surveillance people in their 70s and 80s: all this because these people have allegedly helped elderly people in general to acquire the means to die peacefully, quietly, with dignity. This is like taking a power hammer to crush a fly.

What did you really do about these people who wanted to end their lives?

It has always been said that we help people find the means to leave life quietly.

This approach is illegal, it was never our association that ordered the product, Pentobarbital.

This is what the judge suspected, that we are an association that trafficks in drugs. Rather, we help people order the product themselves. But we have refrained from any marketing or ordering.

“It may be illegal, we don’t dispute that, but it is perfectly legitimate.”

What are you accused of?

I am accused of complicity in the acquisition of prohibited substances.

In the French Republic, there is the principle of fraternity which appears in the constitution. The constitutional adviser recently asserted that the brotherhood could apply even to certain illegal acts.

For example, for people who helped migrants in great danger by accommodating them, they could not be prosecuted for these facts.

We are going to plead this principle of fraternity. It may be illegal, we do not dispute that, but it is perfectly legitimate.

During the debate on abortion (voluntary termination of pregnancy), people have committed illegal acts to allow abortion to become a legal right recognized everywhere.

We did not want to be charged, but since we are and it is not our fault, we will use the trial if there is a trial, of course.

Why do you think assisted suicide is not about to be legalized?

It’s difficult, there is resistance coming from certain lobbies, first of all the medical lobby, doctors in France have often been very conservative.

There is also the religious lobby: the Catholic Church in particular, but not only, is very hostile to the idea of ​​dying with dignity, voluntarily, which is paradoxical.

Christ, in the Gospel of Saint John, said:

A Christian should, more than others, follow Christ, accept that the freedom to die is part of the freedoms granted by God.

The Catholic Church does not have these doctrines and resists this right.

To love life, you have to be free to leave it. Just as when marriages were arranged, until the 18-19th century, marriages were often forced, arranged by parents, it was difficult to love your spouse.

It is the freedom to choose a spouse that has allowed love to flourish.

The same goes for the children. When we had children because we couldn’t help it, we loved them but not always, if it was an unwanted child.

With contraception, we can choose whether or not to have children, children that we will love. It’s the same for life.

You are a former professor of philosophy. Did this discipline help you to have these convictions?

I quote this sentence from Cioran:

“Without the idea of ​​suicide, I would have killed myself a long time ago.”

It is a contradictory sentence but very deep. If I don’t have the option to leave life, I can’t enjoy it.

I was very interested in philosophy with children, from primary and nursery school.

Children want to talk about fundamental issues: happiness, love, death. As children need to talk about these issues, I thought to myself that maybe the elderly were the same thing.

Being free to choose the moment when you leave life is a way of philosophizing, of reflecting on your life as a philosopher and of thinking about it instead of undergoing it.