The McGowan Government’s Voluntary Assisted Dying Bill will now become law after the lower house signed off on the Legislative Council’s amendments. Western Australia has become the third jurisdiction in the federation – and 19th in the world – to legalise euthanasia, with the McGowan government’s voluntary assisted dying law clearing its final parliamentary hurdle on Tuesday evening.

Health Minister Roger Cook ran the Legislative Assembly through all 55 upper house amendments on Tuesday before the bill was passed just after 6pm.

Holding back tears Mr Cook thanked all those involved in developing the bill and said WA was now a respectable second in introducing euthanasia legislation in Australia. 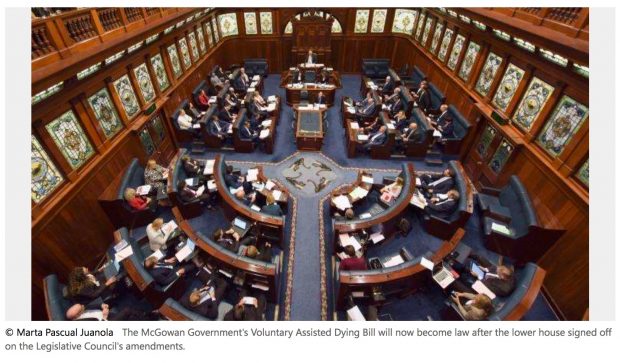 But while the new legislation is not expected to come into effect until the mid-2021, there are already calls for it to be relaxed to allow people who are “tired of life” to access dying under its provisions.

Once in force, WA’s Voluntary Assisted Dying Act will allow patients with a disease that would more likely than not cause death within six months (or 12 months for neurodegenerative diseases) to end their life with a lethal “voluntary assisted dying substance”.

“It is a fundamental question of human rights to be able to exercise your own choice in that situation and it’s voluntary.

“I am very pleased for all those people out there who want to access this that that opportunity will be there for them.”

The draft legislation was passed by the Legislative Council last week with 55 amendments.

Victoria passed similar legislation in 2017, with the first death taking place in August.

Critics of WA’s law said it was the least safe euthanasia regime to be enacted by an Australian legislature.

“It’s verifiably the case that this is the most dangerous legislation that’s ever passed,” prominent anti-euthanasia MP Nick Goiran said.

He said there was no requirement for a medical specialist or a psychiatrist to be involved in the voluntary assisted dying process and the lethal substance would be prescribed to patients to consume without supervision.

“We know from the other jurisdictions, particularly when self-administration is involved, that there are complications, whether that be regurgitating of the substance, asphyxiating, various complications that have happened including a few stories where people actually fall into a coma and then they come out of it,” he said.

Mr Goiran warned it would be inevitable campaigners would attempt to extend the law to those who would otherwise be ineligible.

He said other jurisdictions had changed how they implemented euthanasia laws to “allow further categories of people; those with a mental illness, children and now there’s this argument around those who are what are described as ‘tired of life'”.

Prominent pro-euthanasia campaigner Philip Nitschke said WA’s laws would force the elderly “to travel to the other side of the world where the criteria is not about how sick you are, but about whether you have the decision-making capacity to decide now is the time to go”.

He pointed to 90-year-old Laura Henkel, a West Australian living in Ballina, NSW, who would fly to Switzerland on Sunday because she couldn’t access euthanasia in Australia.

Ms Henkel called for the broadening of Australian euthanasia laws, which she said discriminated against people who were not sick.

Dr Nitschke said Ms Henkel was scheduled for a physician-assisted suicide next Friday.

“When I proposed the Swiss human rights model of assisted suicide to the West Australian parliamentary hearings in early 2018, the Premier said ‘no way’,” Dr Nitschke said.

“It is down to Mark McGowan that the likes of Laura Henkel are now being forced to leave home.

“While Australia might be congratulating itself on its so-called enlightened approach to voluntary assisted dying, the fact that Australia’s laws are so, is too little, too late. The caravan has moved on.

“The infuriating thing is that things need not be this way if the politicians will only listen to the people, and be brave.”