In a euthanasia report card from New Zealand, Euthanasia uptake has been found to be slow so far, but it is expected to rise.

One to two people have chosen assisted death each week since euthanasia became legal in New Zealand in November, new figures show.

A total of 73 people have applied for the Assisted Dying Service in the first two months of legalisation and “fewer than 20” have gone ahead with it, the Ministry of Health told the Herald.

That would mean around 100 deaths were likely in the first year, a much lower number than the 350 deaths the ministry initially predicted.

End of Life Choice Society acting national president Ann David said this was not surprising, because most euthanasia regimes overseas had a slow start.

She said not everyone knew voluntary euthanasia had been legalised in New Zealand, or did not know they had to raise the issue with their GP – it is illegal for doctors to suggest an assisted death.

David also said New Zealand’s law was relatively strict, in particular the requirement for a patient to have a prognosis of six months to live.

“If it’s not cancer you’re not going to get an assisted death,” she said. “The criteria rules out most neurodegenerative diseases and other diseases because doctors simply can’t tell … or can’t pin it down to six months.”

Pro-euthanasia campaigner Maryan Street said one of her friends in Nelson was among the first to apply for help to end his life.

“I didn’t think for a moment that this legislation was going to apply so soon to a friend of mine,” said the former Labour MP.

Diagnosed with a brain tumour, he was initially given 12 to 18 months to live. But his condition has since deteriorated.

“He didn’t want to be less than himself,” Street said. “And he fits all the criteria.”

Most applications were taking four to six weeks between the first assessment and the administration of the lethal dose.

John Kleinsman, a bioethicist at Catholic organisation The Nathaniel Centre, said he was concerned to hear that one patient’s application had been approved in days.

“It happened so quickly, without time to address what might have been deeper, underlying concerns – which is what palliative care is all about,” he said.

During debate on the law change, some opponents argued for a “cooling down” period or minimum gap between a patient’s application for an assisted death and their death. Used in some jurisdictions overseas, it was designed to stop patients from ending their lives impulsively.

The ministry said the End of Life Review Committee, which reviews every death, had not flagged any concerns to the registrar so far. The registrar had received “a very small number of complaints” from the public, but the ministry said it could not provide further details at this stage. It could also not provide detail about the deaths, including age, medical conditions or ethnicity.

To qualify for an assisted death, patients must be assessed by two doctors, who must get a third opinion from a psychiatrist if they have any doubts about the patient’s competency. The ministry reported that of the 56 people who have had two assessments, none had required a third review.

So far, 130 medical professionals have signed up to take part in assisted dying in New Zealand.

David said that their assessments could be done on the phone or on Zoom, unlike in some overseas jurisdictions where it was considered aiding and abetting suicide.

But most doctors wanted to do the assessments in person, including one who took a five-hour round trip to assess a patient in a remote area – a commitment David called “heroic”. 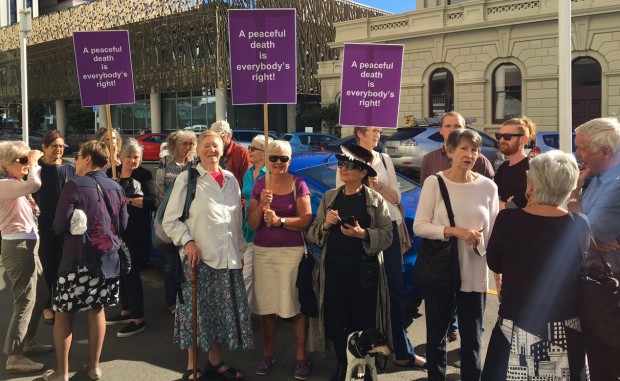