While a new bill on the end of life is discussed this Thursday, April 8 at the French National Assembly, Marianne plunges into the galaxy of pro-euthanasia activists.

Between morbid innovation and bludgeoning arguments, these fighters are far from creating the conditions for a calm debate on an essential question.

Supported by only part of the majority, the bill for “a free and chosen end of life” by MP Olivier Falorni (Freedoms and Territories), examined this Thursday, April 8 at the National Assembly, should not succeed.

As with every eruption of euthanasia into public debate, it has been the subject of intense media lobbying.

Between commercial opportunism and ideology, its activists prevent the holding of a serene debate on a complex subject that touches the most intimate.

At the beginning of March, when the question of the end of life returns to the public debate in France, Liberation devotes a laudatory portrait to Philipe Nitschke, former doctor and entrepreneur of death.

In 1996, his “euthanasia machine” was already causing a stir in Australia, one region of which had legalized euthanasia.

This machine, a computer, allowed anyone wishing to die to receive a lethal intravenous injection with a single click. Simple as ‘goodbye’. 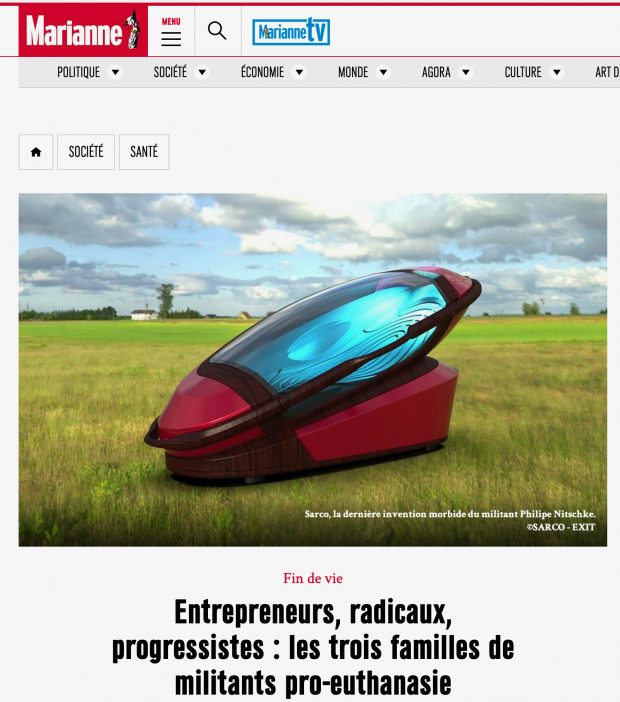 25 years later, Philip Nitschke was suspended from his medical duties and travels between Switzerland and the Netherlands to sell his morbid inventions, at the head of the non-profit organization Exit International.

In a bestseller translated into several languages, he details 15 ways to die.

Latest invention, “Sarco”, a state-of-the-art sarcophagus, can be relocated so that a person can be killed in any location they want.

In front of a beautiful landscape, for example, that she can admire through a window.

Exit promises a “journey to the beyond” in a “luxurious” setting by lowering the oxygen in the capsule to 5% in one minute.

Quick and painless death is also what Dignitas promises in Switzerland.

This association charges 9,500 euros including 3,600 of contribution for “assisted suicide” in one of its centers. “Neither a commercial enterprise nor an organization of pure mutual aid”, Dignitas specializes in the morbid tourism allowed for by the very liberal Swiss legislation.

An “activist organization”, Dignitas campaigns around the world for euthanasia through publicity campaigns, by supporting legal proceedings or by creating local branches.

An expert in its field, Dignitas details through the menu on its site the modalities of an easy start by absorbing a barbiturate, outside of any medical setting.

“Immediately after the absorption of the drug by mouth, sweetened drinks or chocolate are offered to the member in order to allow him to cover the bitter taste in the mouth”, she specifies thus, as to convince of the character innocuous of this act.

Legal or not, they want euthanasia to the point of being ready to fuel the international barbiturate trafficking.

In mid-January, around ten members of the Ultimate Liberte association were taken into custody in an investigation for trafficking in pentobarbital, a powerful barbiturate that kills painlessly, used for assisted suicide in Switzerland and banned in France for medicine. human since 1996.

These activists had bought one or two doses on the Internet for a few hundred euros, from a Mexican dealer who has been targeted by the American authorities.

In favor of the legalization of assisted suicide, the association guides its members to obtain the doses of poison but does not provide it themselves.

The association Ultime Liberte simply defends “for any capable person the legal recognition of the freedom to choose the time, place and terms of his death recognized by a law including assisted suicide, or voluntary euthanasia when the person is in a state where he can no longer communicate and he has written his advance directives ”, ie the possibility of rapid suicide for any voluntary person.

At the risk that grief, mourning or disappointment in love becomes fatal.

They explain to anyone who will listen that they are not campaigning “for euthanasia” but for “choice” and “freedom”.

Often left-wing, they say they are ‘progressive’, they refuse to enter into a debate on the relationship of our human society to death and suffering. For them, euthanasia is easy to see. It is a right to be conquered like any other, a “progress” which it would be absurd or dangerous to oppose.  (But only for the terminally ill).

Socialist Jean-Luc Romero is the most media savy activist in the association that he chairs.

To ensure their publicity, these activists count on the mobilization of stars from home.

On the eve of the examination of a bill on the right to a “free and chosen” end of life, Line Renaud has published an open letter in favor of this “essential progress that should no longer be prevented” , immediately picked up by the French media.