Golden butterflies adorn the walls of the Netherland’s only euthanasia expertise center, put up in remembrance of thousands of patients who have chosen to die with dignity over the past two decades.

Situated in a leafy upmarket suburb of The Hague, the Euthanasia Expertise Center is the only one of its kind, giving information, assisting medical doctors and providing euthanasia as end-of-life care, which was legalized in a world first in the Netherlands on April 1, 2002.

Belgium soon followed later that year and Spain last year became the sixth country to adopt euthanasia — the act of intentionally ending a life to relieve a person’s suffering, for instance through a lethal injection given by a doctor.

The number of people seeking euthanasia is growing in the Netherlands, with some 7,666 last year, up by more than 10 percent from the year before, according to official figures.

The vast majority are aged 60 or over, suffering from cancer or other terminal illnesses.

“Twenty years ago, when the law was passed, it was known, but certainly not used as often as today,” said Sonja Kersten, director of the Euthanasia Expertise Center.

The reasons are many: an ageing Dutch population; the fact that euthanasia is no longer a taboo subject and society has opened up to the issue.

“Dying with dignity is a debate that’s growing within Dutch society, which is quite open to the subject,” Kersten said.

Euthanasia is only authorized in a few countries around the world.

In Belgium, which will mark two decades of euthanasia in May, some 40 French citizens also benefitted from the practice last year.

The decision to ask for euthanasia as end-of-life care remains a “difficult and existential question,” Kersten said.

“It’s neither a patient’s right, nor a doctor’s duty,” to have euthanasia, she added.

In the Netherlands, euthanasia can only be carried out under strict conditions set down in Dutch law.

Children aged up to 16 need the permission of their parents and guardians, while parents must be involved in the process for children aged 16 and 17. From 18, any Dutch citizen may ask for assisted death.

In all cases, the patient must have “unbearable suffering with no prospect of improvement” and must have requested to die in a way that is “voluntary, well considered and with full conviction”.

Other criteria apply as well, like the absence of a reasonable alternative to the patient’s situation.

Doctors, too, cannot be forced to perform euthanasia.

The Euthanasia Expertise Centre helps doctors through the process by sharing knowledge and providing guidance. At the same time, the center helps patients whose doctors refuse to help them.

The center, established in 2012, is a foundation but patient care is reimbursed by health insurers.

It first positioned itself as the “Levenseindekliniek,” Dutch for “End-of-life clinic,” offering on-site euthanasia.

But even before the start, it became apparent that most patients preferred to die at home, Kersten said.

Today, the center can call upon a network of about 140 doctors and nurses around the country, employed by the Euthanasia Expertise Center.

Most euthanasia requests, however, are handled by the patient’s own physician, with whom they already have a relationship of trust. Last year, this was true for 80 percent of euthanasia procedures performed in the country.

“There are however still doctors in the Netherlands who are opposed to euthanasia,” said Kersten, adding “they have every right.”

The center’s medical team itself provided euthanasia to nearly 900 people in 2020, out of nearly 3,000 requests, with figures on the rise.

About 20 percent had dementia or psychiatric disorders.

The Netherlands’ highest court ruled in 2020 that doctors can euthanize patients with severe dementia without the fear of prosecution.

It concerns patients with advanced dementia who are no longer mentally competent but who previously had a clear request for euthanasia.

The decision followed a landmark case, not related to the Expertise center, in which a doctor was acquitted of providing euthanasia on a woman in 2016 with severe Alzheimer’s disease, who earlier requested the procedure. 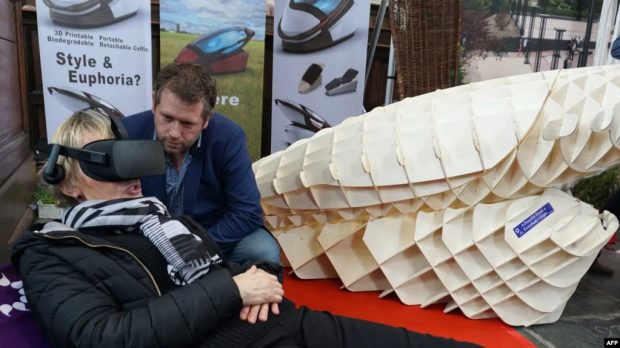 FILE – Dutch designer Alexander Bannink explains how the ‘Sarco’ euthanasia pod works as a woman experiences sitting in the device by wearing virtual reality glasses, on April 14, 2018 at the Amsterdam Funeral Expo.