She’s got four grandchildren with a fifth on the way, a loving husband, and a conviction for importing lethal drugs – Suzy Austen is a little different to your typical grandmother but as a convicted euthanasia advocate Susan Austen ‘thrilled’ by End of Life Choice Bill

The 70-year-old Lower Hutt woman has spent the last 15 years as the head of Exit International’s Wellington chapter – an association which has long championed the legalisation of euthanasia.

It’s a cause for which Austen has fought hard and on Sunday, the End of Life Choice Bill will enter into law.

“I always believed it would come. I had hoped it would come sooner because it’s good to be an initiator – but sometimes it seemed so far away,” Austen told the Herald.

She says she’s “really thrilled” for all the people who need the law – but hopes when it’s reviewed in three years it can be widened.

“We want it to remain but also think about people with unbearable suffering which is not terminal illnesses, there’s a wish there that they could be included.”

She told the Herald she doesn’t want the safeguards relaxed, but made more inclusive.

Exit International believes that people should be able to end their own life with dignity, should they choose to do so.

“As it’s gone through now, people can apply for End of Life if they have extreme suffering, if they experience the worst-case scenario, but Exit International is an organisation where people believe they shouldn’t have to go and get someone to approve that they’re allowed to die when they want to – we believe people who wish to, can end their own lives, quickly, peacefully and do it by themselves without being dependent on anyone else to assist them in any way.”

Austen hopes it could mean people who have long-term debilitating medical conditions which are not strictly terminal – such as multiple sclerosis – will be able to have the choice to end their life with dignity.

“There are some conditions people find unbearable, but they have to just exist with that, still being of a sound mind and the idea of that possibly being included in the Bill in future will hopefully give them hope.”

She stresses this does not mean people who are in mental distress and feeling suicidal – and she would never, ever advocate suicide as a distress response – but someone of rational mind, in a position to make an informed decision, should be able to choose to end their own life.

“Most of humanity would do what they could to stop people in distress from ending their own lives – but this is rational suicide.”

Austen’s advocacy is not just talk – in 2018 she spent weeks winding her way through the justice system after she was charged with importing the euthanasia drug pentobarbitone. Her conviction came two years after police bugged her home, listened in to her Exit International meetings and arrested her after a staged traffic stop. 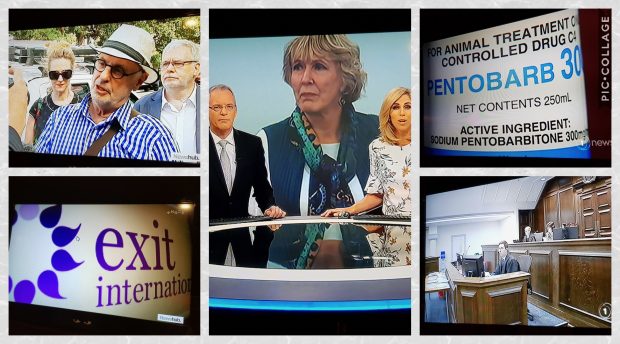 Suzy also faced a charge of assisting her fellow advocate, 77-year-old Anne-Marie Treadwell, to commit suicide – of which she was found not guilty.

She told the Herald the drugs were for her to keep in a back cupboard should the desire to end her own life ever arise.

“I remember the police asking me when I was interviewed ‘what’s its street name?’ and I said ‘it doesn’t have a street name!’. People who avail themselves and can obtain this drug, which is a lethal drug, will not sell it! You get it for yourself, and you’re responsible for yourself.”

She spent weeks travelling from her Maungaraki home in Lower Hutt to the High Court in Wellington with her supporters and husband by her side.

“I took it in my stride very strongly because I believe I’m responsible for my own actions…but it affected my husband greatly and I must admit I had never thought about how it would impact those around me.

“I just believed in the cause and thought one should be ready.” 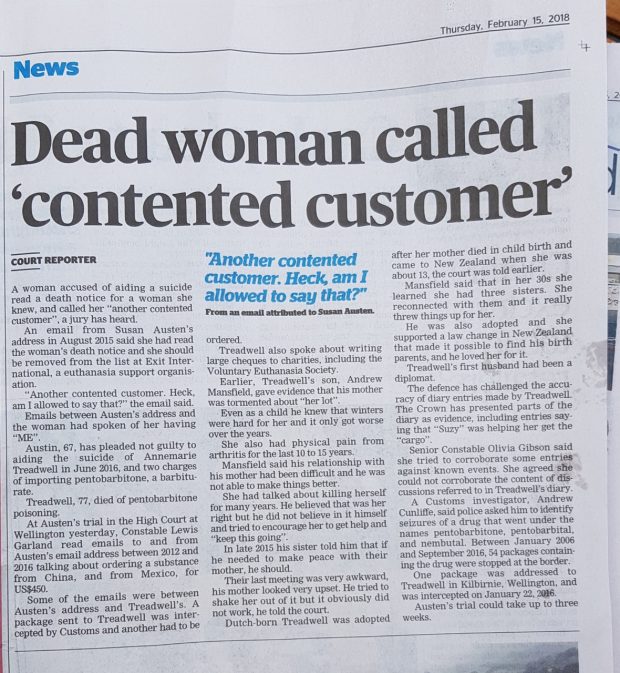 Despite the pressure from the legal case against her, Austen says it made her relationship with her husband Mike Harris – “Jolly Mike” to his friends – stronger than ever.

“He supported me 200 per cent. He was right beside me all the way through but it was a very tiring process. It was very stressful for him – and for me, it was just the process you do, this is what happens to you.”

Now three years on from her conviction Austen is still advocating for Exit International – albeit under slightly different circumstances.

While she and Harris are more than happy to host meetings at their home, Austen says other members are worried she may be at the mercy of the legal system again.

“Now [the meetings are] in Wellington in a hall and it’s not the same because here everyone mixed, had coffee afterwards but now there’s not quite the same feeling.

“They’re all so keen to protect me, they don’t want me tarnished with anything that may be seen to be illegal.”

From November 7 people who fit the criteria for euthanasia will be able to apply to end their lives – although it’s unlikely anyone will actually die before December due to the length of time it will take to be properly assessed.

Austen says when the time comes, she’s glad New Zealanders will be empowered by their choice to die.

“I think it will make people feel powerful because they can choose – of course everyone can choose [to end their lives] but this has got dignity, where people just slip away.”