The Arizona sisters who died by assisted suicide in Switzerland were ‘tired of life’ reports The Independent.

Sisters Lila Ammouri and Susan Frazier decided to end their lives at a Swiss assisted dying clinic after becoming “tired of life”, according to an advocate who was advising them.

Dr Ammouri, a palliative care doctor aged 54, and Ms Frazier, 49, had been suffering from medical “frustrations” such as chronic insomnia, vertigo and back pain, Exit International director Philip Nitschke told The Independent.

The sisters had intended to travel from their home in Arizona to Switzerland in early 2021, but the trip was delayed due to the Covid pandemic, he said.

They first contacted Exit, a non-profit assisted dying support group, in September 2020 to say they were exploring options to die by suicide.

“The explanation was that they weren’t 100 per cent well. They were complaining about what you might call frustrations. Collapsed dics, chronic back pain, chronic insomnia, vertigo,” Dr Nitshke told The Independent.

“They had both decided they were tired of life and it was time to go.

“What was very clear was that dying together was non-negotiable, it was very important to them.”

The sisters also revealed to Dr Nitshcke they had endured a “troubled” period in their lives.

“They didn’t give us much detail, but they said they had helped each other through what had been a difficult time and saw themselves as being each other’s best friend.”

They became members of Exit in October 2020, which provided them with DIY handbooks on how to take their lives.

But Dr Nitschke said the sisters were worried that the procedure may not succeed, and he placed them in touch with Pegasos, a Basel-based assisted dying organisation which is one the few clinics that does not require proof of terminal illness.

They became members of Pegasos in March 2021, and had originally intended to travel to Switzerland soon afterwards, but faced delays as Covid-19 cases surged in Europe and the US.

Dr Ammouri and Ms Frazier flew to Basel on 3 February without telling their brother and sole surviving relative Cal, who lives in New York City, colleagues or friends.

At Pegasos, they were given a full psychiatric examination and a “pretty thorough checking over of their details” to ensure the information they had provided matched up.

“Pegasos were comfortable that everything about their story was exactly as they described.”

They died together on 11 February.

In a statement to The Independent, Pegasos Director Reudi Habegger said the organisation worked closely with medical professionals and local authorities before determining clients were eligible to die.

“After careful clarifications and within the framework of the official rules, we respectfully accompany people with unbearable suffering on their last journey.”

Dr Habegger said Pegasos was committed to ensuring that adults “capable of judgement can exercise their right to a self-determined, humane death”.

Pegasos, based in Basel, Switzerland, offers a complete medical aid in dying service for $11,000 (Pegasos Association)

Dr Ammouri and Ms Frazier’s colleagues raised the alarm when they failed to turn up for work on 15 February.

Colleague David Biglari said he became concerned when nobody had heard from the siblings for a week, and received a strange text message on 10 February with an uncharacteristic spelling mistake.

The message read: “Hey! Sorry you needed surgery. I hope you’re [sic] pain is controlled. I’m currently in Europe on a little vacation.”

On March 23, a spokesman for the Basel-Landschaft Public Prosecutor’s Office confirmed to The Independent that the sisters had died by suicide within the Swiss “legal framework”. 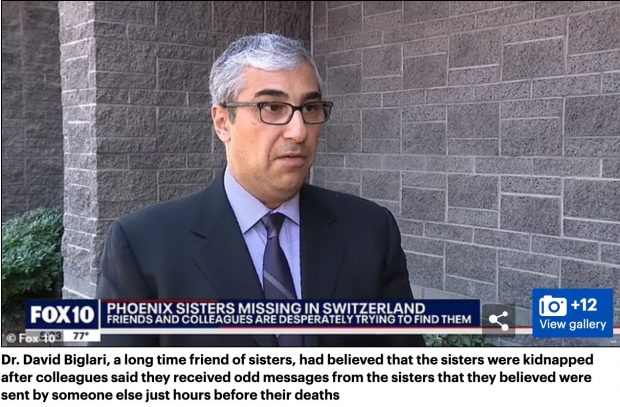 “They both committed suicide – with the help of an assisted suicide organisation,” the spokesman said.

Cal Ammouri told The Independent he was shocked to learn his “special” sisters had decided to take their own lives without telling him.

Friend David Biglari said he became suspicious after he received a text from one of the missing sisters with an uncharacteristic spelling mistake.

Dr Nitschke said he was also surprised the sisters did not inform Cal.

“The usual reason for that is that people fear that there might be some attempt to frustrate their plans, so by not being too clear about what’s going on means you won’t get someone trying to put a stop to it.

“They made it clear they put in place provision for their brother, but that doesn’t explain why they didn’t say anything.”

The Daily Mail reported Dr Ammouri placed her $1m Arizona home in an intrafamily trust less than two weeks before travelling to Switzerland, which allows the property to be transferred to next of kin without a formal legal process.

As a hospice specialist who had spent years tending to patients who were seriously ill and dying, Dr Ammouri would have been “well aware of the limits of palliative care”, Dr Nitschke said.

A longtime voluntary euthanasia campaigner, Dr Nitschke said he had seen an increase in the number of people enquiring about end of life options who were concerned that “we’re about to slip into some sort of planetary crisis”.

The climate crisis and war in Ukraine was adding to people’s sense of existential dread, he said, adding Exit had a policy of usually only assisting over 50s.

“The idea was that if you’ve lived for 50 years and if at that point you decide your life is something you wish to divest yourself of life then we’ll speak to you,” he said.

“As they get older, some people reach the point where they realise their health problems are only going to get worse.

“They almost try to rationalise, or explain to us by trying to medicalise their suffering so other people can say it makes sense.”

It was “extremely rare” for siblings to choose to die together, Dr Nitschke said.

He was only aware of one other case in Australia in 2017 where mother Margaret Cummins, 78, and her daughters Wynette and Heather, aged 53 and 54 decided to end their lives together.

In the United States, 10 states and Washington DC have adopted aid-in dying laws, and more than a dozen more states are considering passing legislation.

The debate is often fiercely contested between right to die organisations and opponents, who say the laws are open to exploitation of vulnerable citizens who may suffer from a disability.

Even if Ariziona had passed a bill currently being debated to allow aid-in-dying, the sisters would not have met the eligibility requirements of being in the final six months of a terminal illness.

Dr Nitschke says the Swiss laws which gives mentally competent adults over 18 the right to choose to die should be adopted as a legislative model in other jurisdictions.

“Under Californian law, you can be suffering horrifically but unless you’re going to die in six months it’s not an option.

Editor’s note – the Arizona sisters who died by assisted suicide in Switzerland were ‘tired of life’ and would never have qualified for an assisted death under CA law.