I only knew her a short time but I am honoured to provide some insight into Annah Faulkner’s Final Days.

It didn’t take Annah and I long to feel like we had known each other all our life as we shared precious time laughing, eating, drinking, chatting about our early lives, the trials & tribulations we had been through and how our lives well lived had been so enriching for us both.

Our commitment and trust to each other developed very quickly and brought us both comfort and hope: to me as the Tasmanian Coordinator of Exit International and to Annah as an Exit Member making plans for her own Exit.

Annah was a very special person and despite a solid network of close friends, she felt she had very few others with whom she could talk about her plans to end her life on her own terms.

Annah came upon obstacle after obstacle when trying to source the equipment she would need: being interrogated by sales personal as to why she wanted certain items. She was the first to admit that she was not mechanically minded.

She was on her own, and she knew it and she felt deeply the isolation, loneliness, her fear of being ‘exposed’. She resented being made to feel like a criminal.

Annah was a woman with an abundance of conviction and courage, which was evident in the last venture she would undertake in her life. She was no shrinking violet.

Which brings me to why I wrote this article.

Australia prides itself on being a caring and compassionate country, with an abundance of resources to help those in need, and offering support to those who experience suffering in all its forms.

For example, the recent floods, bushfires, victims of crime, disability support, displaced people from other countries, those incarcerated and so forth.

However, if you dare to hold someone’s hand, or be with them as they take their last breath by their own volition, then you run the risk of legal action, with conviction.

How Annah must have felt in her last hours, totally on her own, with no one to talk too, or just to be present with her, perhaps to hold her hand, is indescribeable. I felt sick to the guts and ashamed that this was the sum of the human condition, of Annah’s human condition.

There was no caring, comfort, compassion that could be offered to Annah in her last hour: only emptiness, uncertainty and fear as she undertook this task on her own.

Annah’s death was nothing short of cruel, callous and totally uncaring. As a human being Annah had done nothing wrong. She had paid her taxes all her life. She had been a successful writer and author of many books which brought pleasure to so many.

As I continue to live life, reflecting on the variety of chooses we all have to make in our daily lives, with some choices being harder than others, I cannot for the life of me get my mind around how a civilized, progressive, enlightened society like Australia cannot and will not talk, discuss, advise, inform consumers / patients on end-of-life choices, and associated matters.

Australia has a death-denying culture. A huge percentage of the populace have no clue regarding death & dying.

I’m continually astounded by the number of over 70’s who are befuddled by this final stage of the lifespan. You can have a good or bad death. You should have a choice.

Keeping people uninformed about one’s end of life is more about controlling our society: we are shackled with conditions, rules and regulations. Of course there are the elite who have access to the best drugs and know-how but the silent majority will suffer on in ignorance, and in silence.

I look forward to the day when organizations like Exit International can have their information brochures on the walls of doctor’s surgeries, the Peaceful Pill Handbook on shelves and in libraries everywhere, along with all the other health related literature.If only!

Exit International was there for Annah Faulkner, when no one else was.

An enlightened society…I THINK NOT! 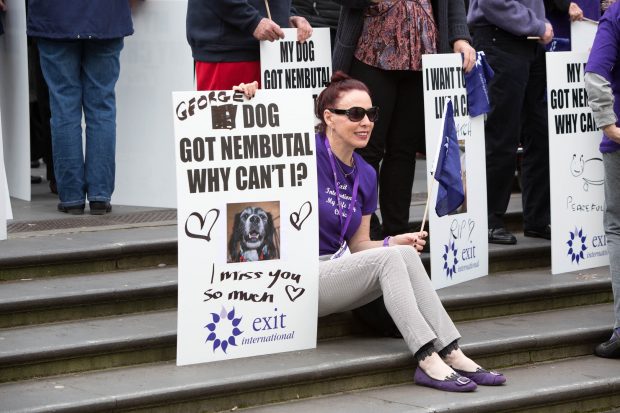