“The winning documentary is an inventive and deeply moving account of 31-year-old Melbourne writer Angelique Flowers, who is given only months to live, and the different ways in which she and her family face her impending death,” said DAF Award for Australian Documentary Jury Member Dr Mitzi Goldman.

“Unflinchingly, this film shows us Angelique’s desperate search for a way to die with dignity – one made all the more difficult by her parents opposing belief that she should die as God intended, and her sibling’s determination to help her die as she chooses, even though it is against the law. Dealing with difficult subject matter that is universal in its urgency and relevance, the film tells a very personal story in an artistic and honest style that delicately balances personal suffering with the larger ethical and moral questions posed by voluntary euthanasia. This is a brave and confronting attempt to bring a subject rarely discussed in Australia back into the public arena.”

“We’d also like to give special mention to the film Tender – a film that guides us through emotionally loaded territory without succumbing to mawkishness. The directorLynette Wallworth’s achievement in covering multiple personal stories during often heightened moments with both sensitivity and humour is singular and done with great skill. The film is authentic, powerful and ultimately, true to its title – Tender.”

On Michelle Flowers’ 35th birthday she received a bundle of letters from her younger sister Angelique. This was no humdrum correspondence; rather they were birthday wishes full of charm and wit. The letters expressed Angelique’s love of nature, art and literature, and most of all her unique and joyful personality, despite suffering from a painful disease since her mid-teens. A year on, she’s in the last phases of terminal illness, and is struggling to find a peaceful way to die – not in a hospice, but somewhere altogether more in tune with her spirit. Janine Hosking’s innovative and moving film follows Angelique’s final months as she struggles to find grace in an inflexible health care system. 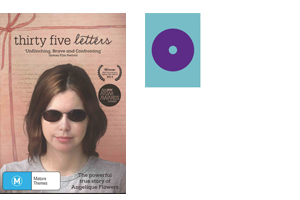