Speaking publicly for the first time after ending three years of house arrest after being convicted for helping three people to die DignitySA founder Professor Sean Davison said it was time the law changed to recognise compassion – where euthanasia is not confused with murder.

‘I have done my time. But I did not commit a crime,” said Professor Sean Davison, founder and director of DignitySA which has been lobbying for a change to end-of-life legislation in South Africa.

Speaking on the steps of the Cape Town High Court on Monday, Davison was marking the end of his three-year house arrest sentence, after being convicted in 2019 on three counts of premeditated murder. 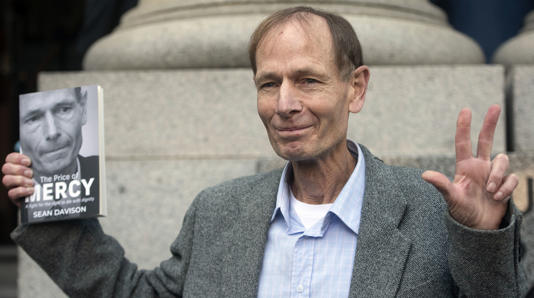 Sean Davison with his new book The Price of Mercy

In September 2018, Davison was arrested and charged with the murder of his quadriplegic friend, Dr Anrich Burger.

Burger had first contacted Davison to offer support for DignitySA which Davison had established in 2011 after his return to South Africa from New Zealand. Davison was initially going to accompany his friend to Dignitas clinic in Switzerland, until Burger decided he wanted to die in South Africa.

Daily Maverick’s Marianne Thamm previously reported that Davison had sat with the deceased in a hotel room in Cape Town, where Burger had “consumed a lethal dose of phenobarbital” in 2013.

In November 2018, Davison faced a second murder charge, over the death of Justin Varian, who was terminally ill with motor neurone disease. Davison was reportedly accused of placing a bag over Varian’s head and pumping in helium to suffocate him.

Professor Sean Davison with Professor Willem Landman of DignitySA, Dieter Harck, who is terminally ill, and his wife Lynn at the Cape Town High Court on 20 June 2022. Davison has completed three years of house arrest after he was convicted on three counts of premeditated murder for helping three people to end their lives.

In April 2019, Davison faced a third charge of premeditated murder, after he was accused of killing Richard Holland, a South African triathlete who suffered a brain injury which left him with locked-in syndrome.

Davison was convicted in the Cape Town High Court on three counts of premeditated murder, on 19 June 2019. In a plea bargain agreement with the State he received three years’ house arrest and was barred from speaking to the media for the duration of his sentence.

“I helped three men to die – three men suffering unbearably with no hope of recovery. Three men desperate to die, and three men incapable of ending their own lives. For that the court found me a murderer. I am not a murderer, I am not a criminal,” he said.

Davison, who holds dual South African and New Zealand citizenship, first made headlines in 2010 when he was arrested and charged after he had helped his 85-year-old, terminally ill mother to die in 2006. Following a trial in the Dunedin High Court, Davison was convicted of his mother’s assisted suicide and sentenced to five months’ house arrest in New Zealand.

Read more: “Sean Davison’s euthanasia trial carries a 44-year-old echo — and not much has changed”

On the high court steps on Monday, Davison maintained that he had helped his mother to die out of compassion.

“I did not cross a line – there was no line to cross.”

Davison previously attributed that relatively light sentence partly to the late Archbishop Desmond Tutu’s plea to the New Zealand court for leniency. Tutu was a friend of Davison’s and supported the campaign of DignitySA to change the law on assisted suicide.

“I’d like to gratefully acknowledge the friendship and support of the late Archbishop Tutu,” said Davison.

“Not only did he support me every step of my journey, but he was instrumental in opening the eyes of the world to the issues of dying and the need to change the law. In his honour, I will continue working for his wish to change the law,” he added.

Addressing the media outside the high court, Davison extended his thanks to “the millions of South Africans who are holding out for a law change and getting frustrated at the slow progress”.

“I want to thank them for being patient and believing it will happen; because it will happen. We will have a good law, a compassionate law and a law that does not confuse euthanasia with murder,” he added.

Professor Sean Davison speaks to the media at the Cape Town High Court on 20 June 2022.

Davison added that on his first official day of freedom, a woman suffering from an incurable disease had contacted him, asking for assistance to die.

“Emma contacted me today for the first time, asking for help to die, suffering unbearably from an incurable disease. I thank Emma for her understanding that I cannot help her,” he said.

While Davison insisted he did not have any resentment towards the court or law enforcement, he took aim at the lack of action by politicians and the slow pace of change in legalising assisted suicide in South Africa.

It’s time they started engaging in the debate and the discussions, and did something about changing the law,” he said, adding that other countries around the world are amending their laws, including New Zealand and Canada.